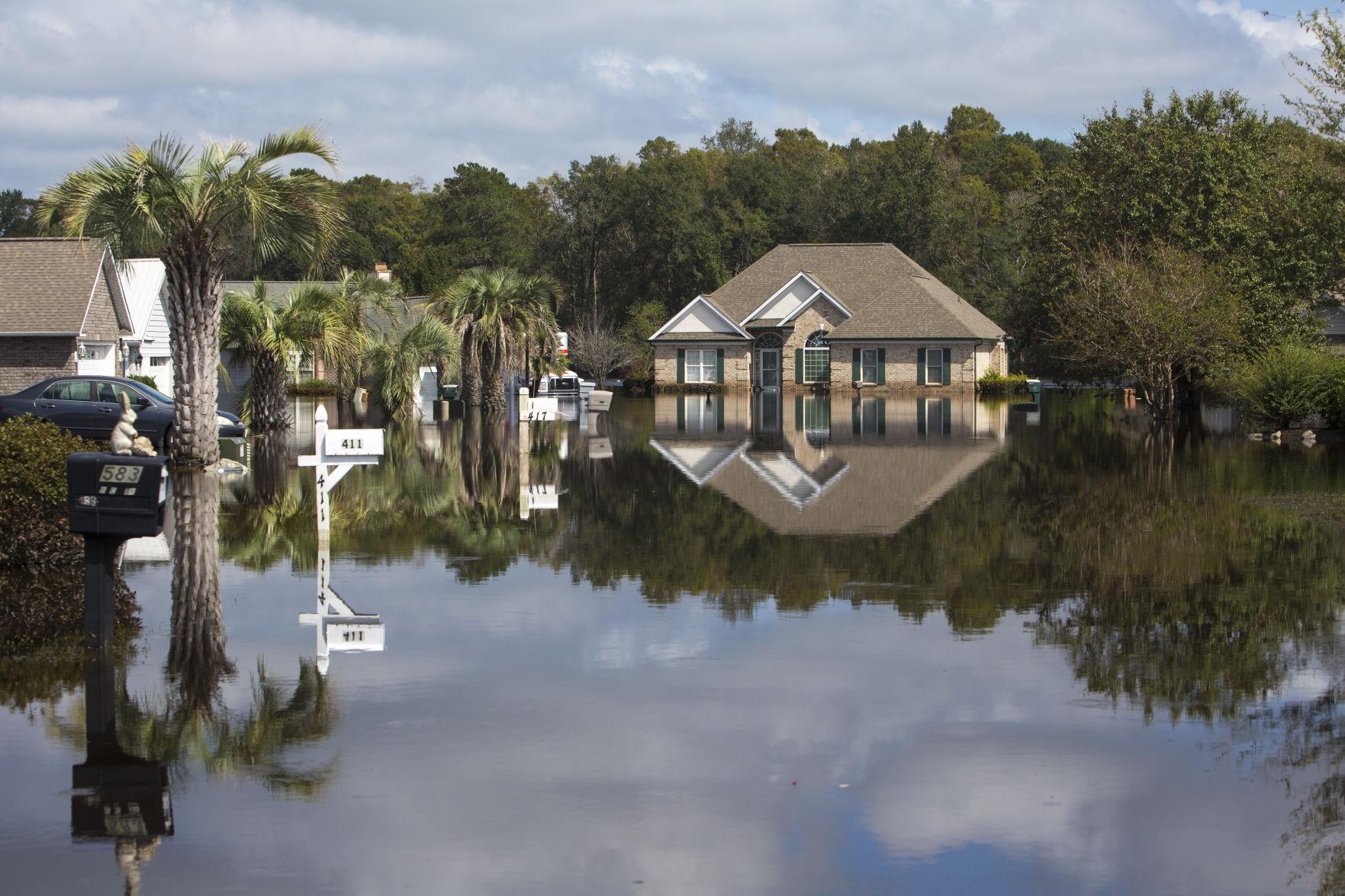 Homes stand in floodwaters on a street in the Aberdeen Country Club community near Longs in Horry County during 2018′s Hurricane Florence. File/Andrew J. Whitaker/ Staff.  By Andrew Whitaker awhitaker@postandcourier.com

Conversations surrounding the ordinance have been happening since April, and on June 1 the ordinance passed its first reading unanimously.

The second reading and public comment will take place June 15.

“It’s probably some of the best standards that actually have been even considered in the state since Hurricane Florence,” said Horry County Rising founder April O’Leary.

Horry County Rising is a political organization that is working to mitigate flood risk throughout the county by working with elected officials and locals.

The current standards for developments in a flood zone include 1-foot freeboards, and homes within Special Flood Hazard Areas that have undergone damage more significant than 50 percent since 2016 have to follow current standards.

According to the U.S. Geological Service, Special Flood Hazard Areas are known as 100-year flood zones, meaning the zone has a 26 percent chance of being flooded at least once in 30 years.

With 500 homes built in Special Flood Hazard Area since 2015 and more on the way, this new ordinance could bring safer measures to areas that experience constant flooding.

The new restrictions Horry County is considering include freeboards, and since the ordinance made its way to council, the height of those freeboards has changed.

Originally the county was going to consider a 2-foot freeboard regulation, but they are now hoping to increase it to 3 feet.

Freeboard is a term used by FEMA to explain the amount of space between a home’s lowest floor and the ground. For homes located in a Special Flood Hazard Area, the FEMA requirement is 1 foot. Areas such as Myrtle Beach and Surfside Beach already have a 3-foot regulation.

This change came after activists like O’Leary pushed for the increased freeboard standards with its “Don’t Build in The Swamp” campaign.

Another issue raised by the Infrastructure and Regulation committee was how to deal with wetland fill.

Compensatory storage is when an area is filled in with rock, sand or other fill materials and an equal amount of area is opened to allow water levels to balance. This would take place within Special Flood Hazard Area and Supplemental Flood Zones.

Additionally, some of the other tighter restrictions would restrict critical facilities such as hospitals from being built in 100- or 500-year flood zones. Coastal A Zones would be held to a higher standard and need to meet the exact requirements as V- Zones and the county adopt Supplemental Flood Zone and Effective maps.

Another potential change comes with substantial damage and substantial improvement, which is the amount a person’s home can be repaired before having to adopt new flood standards.

Homes built before flood restrictions or that weren’t in a flood zone at purchase must follow county standards after substantial damage. Currently, the damage has to be 50 percent, but the new change would bring it down to 48 percent.

This would be 2 percent less damage a home has to incur before the home needs to follow flood regulations standards.

The timespan — 5 years or 10 years — is how long the damage matters. Currently, as the damage is cumulative, damage going back to 2016 is what homeowners would need to be concerned about. With the potential change, the damage could go back to 2011.