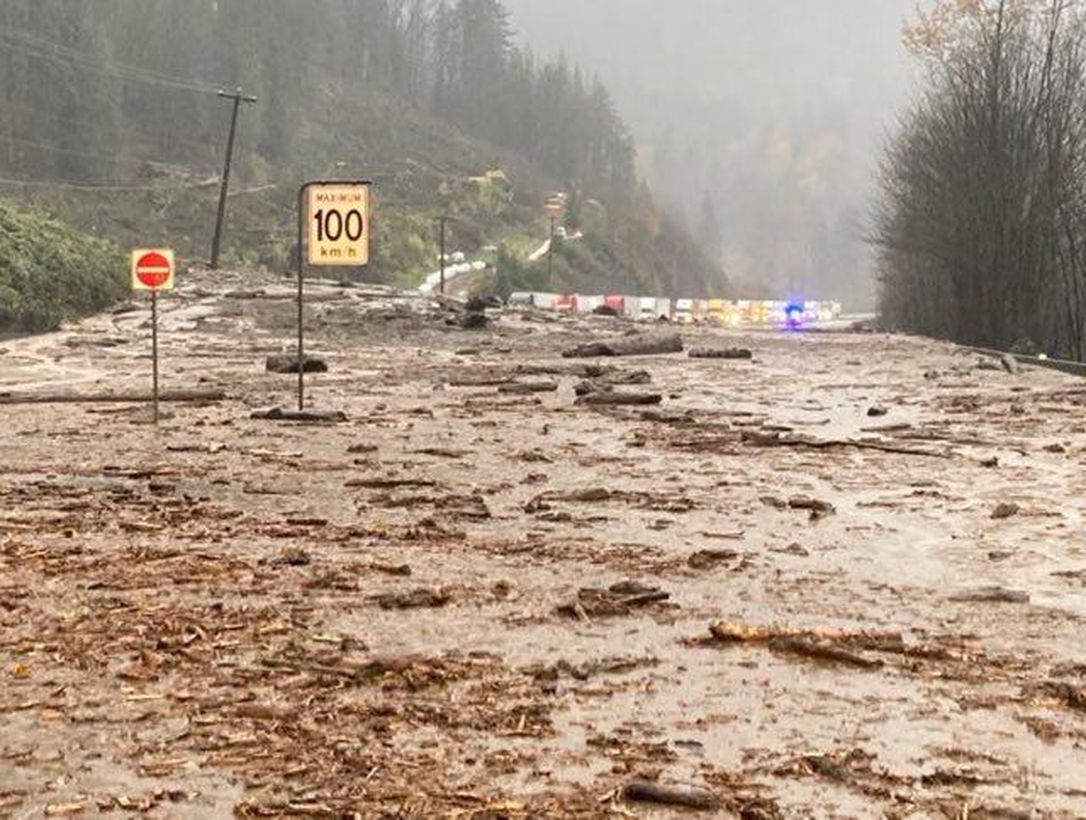 Mudslides had closed the highway betwee Popkum and Hope, officials said.  BC TRANSPORTATION/TWITTER

As a month’s worth of rain poured down over 48 hours, the rushing Coldwater River was one of many that breached its muddy banks Monday and filled up the streets of surrounding communities in southern British Columbia as though they were part of a stoppered bathtub.

There were RVs collapsed and half submerged by the water. There were school playgrounds, turned to pools.

In Merritt, B.C., as she worked to help drag stuck cars and trucks, Carly Isaac sent photographs to the Star with a comment. 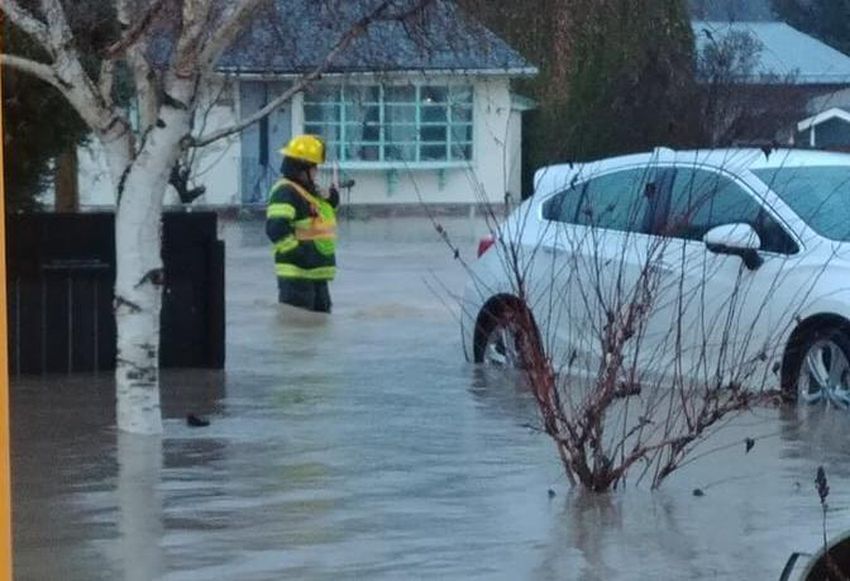 B.C. resident Ryan Yeadon was rescued by boat by the local fire department this morning as water overtook his home. The entire town of Merritt has been ordered to evacuate due to extreme flooding.  SUPPLIED BY RYAN YEADON

She and the town’s roughly 7,000 residents would later receive the order to flee to either Kamloops or Kelowna, each over an hour away.

Months earlier, this same town had been evacuated because of threats from wildfires. 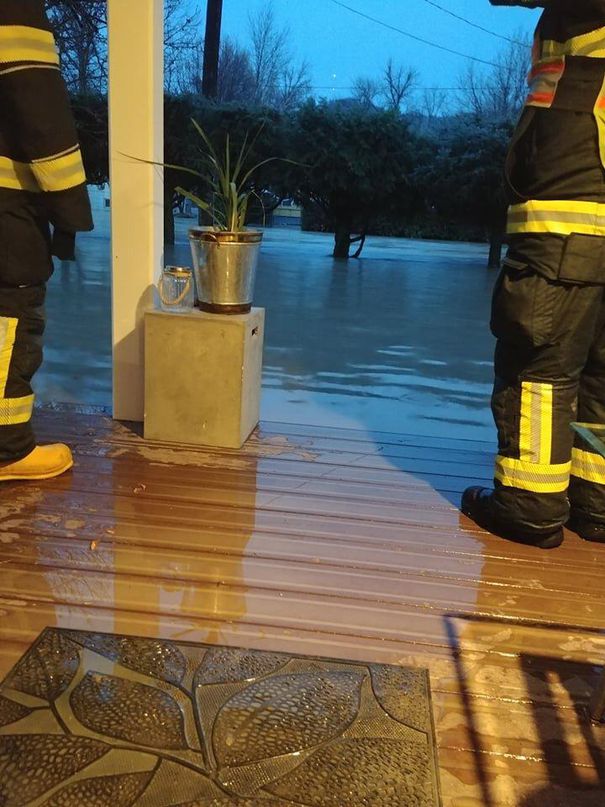 To Isaac, it is all signs of a changing climate.

“Two months ago, we had fire alerts and orders,” she wrote.

“Now water is doing it.”

It’s a dance between horrific and opposing extremes that has left people in this region fleeing their homes by the thousands multiple times a year: From fires in the summer; from flooding in the fall and winter.

Far from being a coincidence, B.C.’s pummelling by compounding disasters is exactly what scientists expect to happen as the climate warms.

The reality of extreme flooding made for a hard reckoning Monday, as military helicopters flew to the rescue of hundreds of people trapped on a highway between landslides, and as thousands fled their sodden homes.

The destruction was not limited to any one locale. 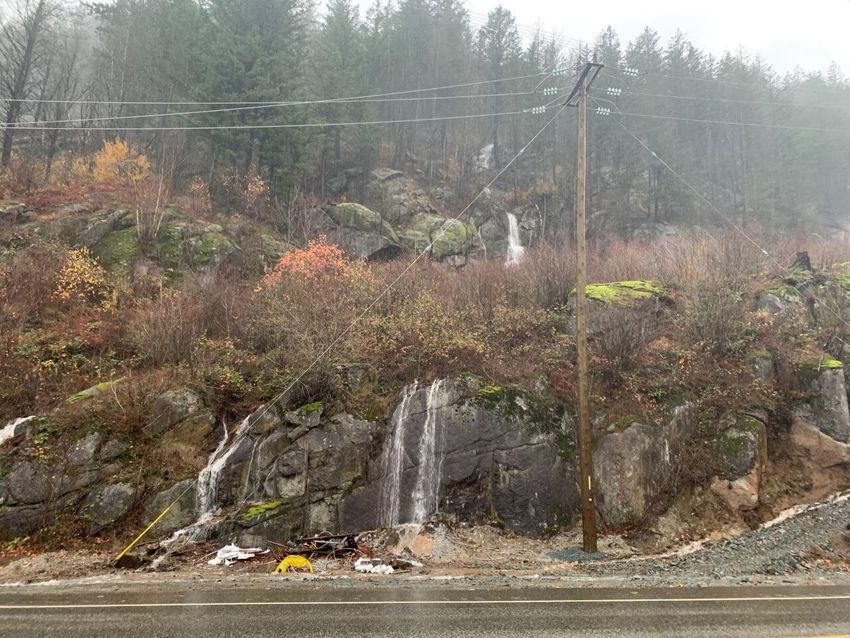 Paul Deol and his family were driving home to Langley, B.C., from Kelowna when they became trapped on a stretch of Highway 7.  PAUL DEOL

A barge broke from its anchor amid high winds, and drifted to a downtown Vancouver beach.

Cars sloshed slowly through a foot of water on the Malahat highway near Victoria, sending waterfalls over the edge of a collapsed highway barrier.

Tons of mud slid down the steep slopes next to a busy highway in Agassiz.

A row of cabins, one of which bears a sign reading “Riverside,” was engulfed by the Tulameen River in Princeton, another town evacuated in its entirety. 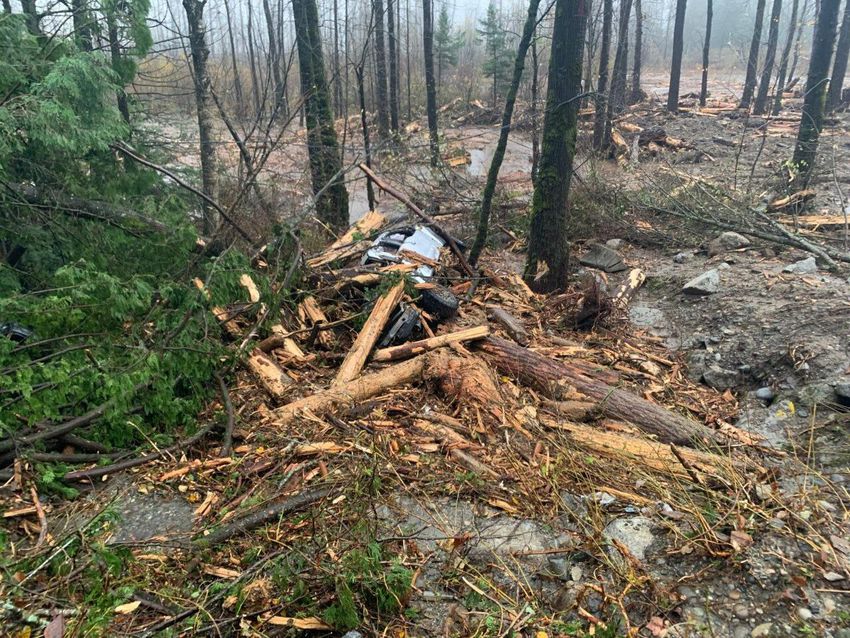 Paul Deol and his family were driving home to Langley, B.C., from Kelowna when they became trapped on a stretch of Highway 7 between Agassiz and Hope, after mudslides caused by heavy rainfall shuttered highways in several areas.  PAUL DEOL

And at one point Monday afternoon, every major highway into Vancouver was closed due to flooding and destruction from the rains.

Back in Merritt, resident Ryan Yeadon was rescued by the fire department at 6 a.m. as the entire first floor of his house became submerged in water.

Yeadon, who uses a wheelchair, was taken by boat from his front door to dry road where he was picked up by a friend. Firefighters waded waist deep in flooding that had reached the level of Yeadon’s front porch.

Yeadon said he was in “shock,” adding that he “won’t be home for weeks.” 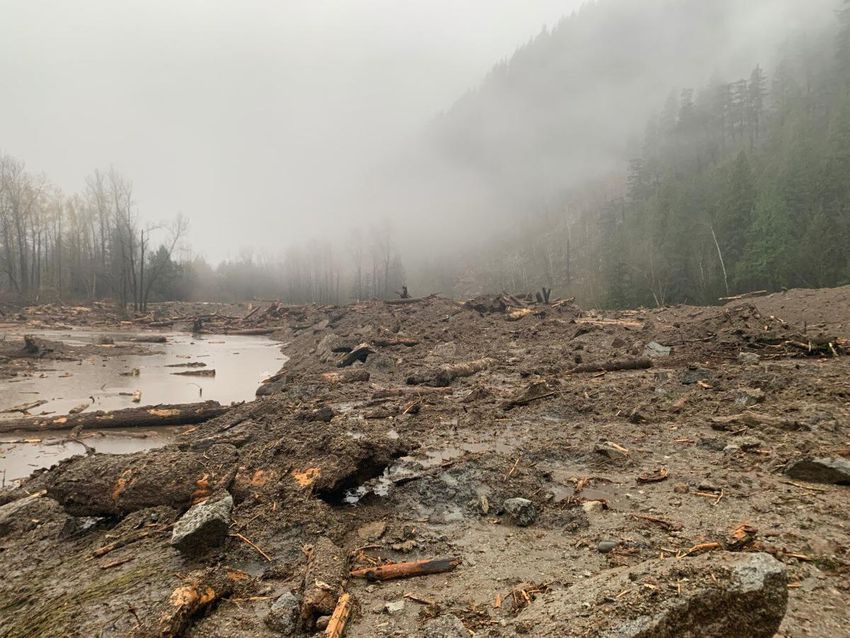 Paul Deol and his family were driving home to Langley, B.C., from Kelowna when they became trapped on a stretch of Highway 7 between Agassiz and Hope.  PAUL DEOL

The extreme rainfall is being attributed to an atmospheric river — a dense mass of water vapour clouds carrying moisture from the tropics and subtropics toward the poles, and falling as rain.

There are aggravating factors that make such a rainfall worse — including having a large amount of land that was recently burned, as is the case in British Columbia.

Atmospheric rivers have long been a part of B.C.’s coastal climate, but scientists say climate change is making them bigger, and more likely to touch down. They also say what was seen Monday is exactly what you would expect from a storm made more extreme by climate change.

“I’m surprised at the area affected and the significant disruptions to life in general,” says Brent Ward, co-director of the Centre for Natural Hazards Research at Simon Fraser University. “This is big.” 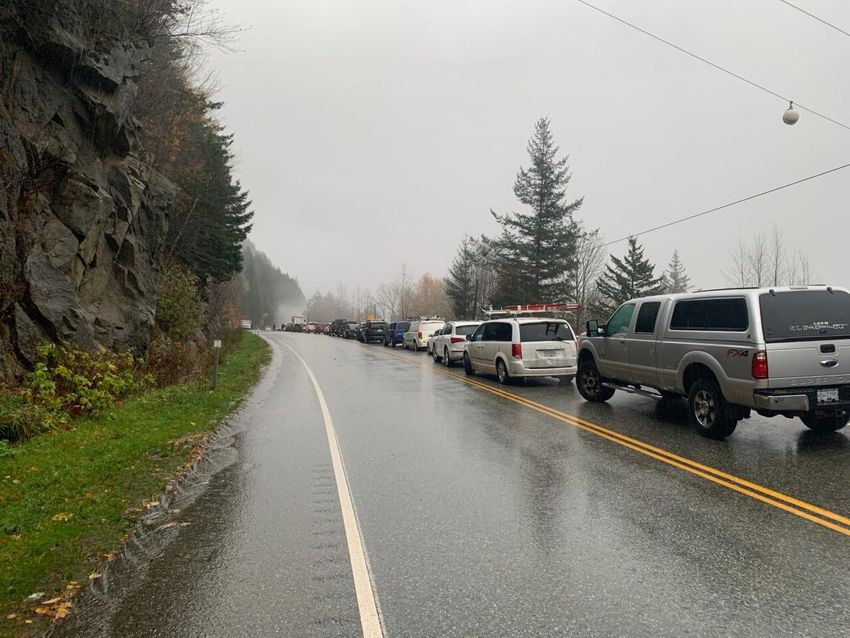 “What the modelling suggests is that you get more extremes, even on an annual basis,” says John Clague, Canada Research Council Chair in Natural Hazard Research at SFU. “They’re able to show that in a warming climate we can expect more of these effects — the frequency and severity of atmospheric rivers.”

Ward said the intensity of an atmospheric river is what can make a difference between heavy rainfall and large-scale destruction. In November, the grounds in coastal B.C. tend already to be wet.

“So the high intensity atmospheric river, because the ground is already wet, is enough to cause certain layers of soil to fail,” he said. That’s when you get landslides. Mudslides. Debris falls. Erosion in highways.

Another exacerbating factor is the summer’s burning. 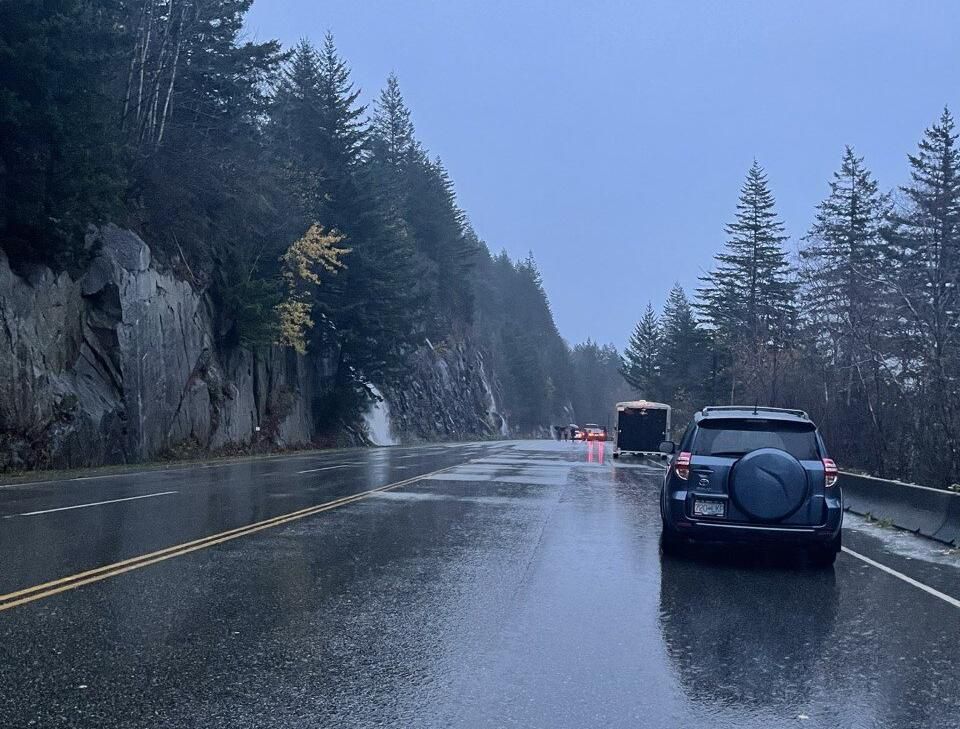 About 100 people were trapped Monday by two slides on the highway between Agassiz and Hope, B.C. Rescue workers said they were not in danger. There was no immediate timeline on clearing the slides. Uploaded by: Keith Bonnell  WITNESS PHOTO

“Where we’ve had a wildfire, we’ve burned the organic soil, we’ve reduced the vegetation, and it becomes water repellent,” Ward said. “The water doesn’t infiltrate, it just flows across the landscape and triggers landslides.”

Public Safety Minister Mike Farnworth said search-and-rescue teams seeking stranded drivers, as well as emergency-response personnel to help with sandbagging and flood-reduction efforts, were already working in communities from Vancouver Island to B.C.’s Interior, but that the conditions were going to get worse before they would get better.

Fire crews rescued 12 people in southern British Columbia overnight — including one group of people who were reportedly trapped in their car as the waters rose around them — after mudslides and rock slides caused by relentless rain closed highways in several areas.

About 275 people remained trapped between two slides on the highway between Agassiz and Hope, B.C. A massive Canadian Forces rescue mission began Monday afternoon, using helicopters to lift those people from the area. Officials said they were not in danger, but had spent the night stuck on the highway, some running out of gas, food and water.

In the Huntingdon neighbourhood of Abbotsford, fire engines and police cruisers were on almost every street, with some used as barricades to areas where the water was already too high. Curious residents meandered around to survey the damage and surmise how bad the flooding might get.

This, for many, is the front line, where the water ends and pavement begins.

Mardi Scott said she just moved into her new home in the area and now was having to leave. She wasn’t worried her house could be flooded yet, but didn’t mind the evacuation order. 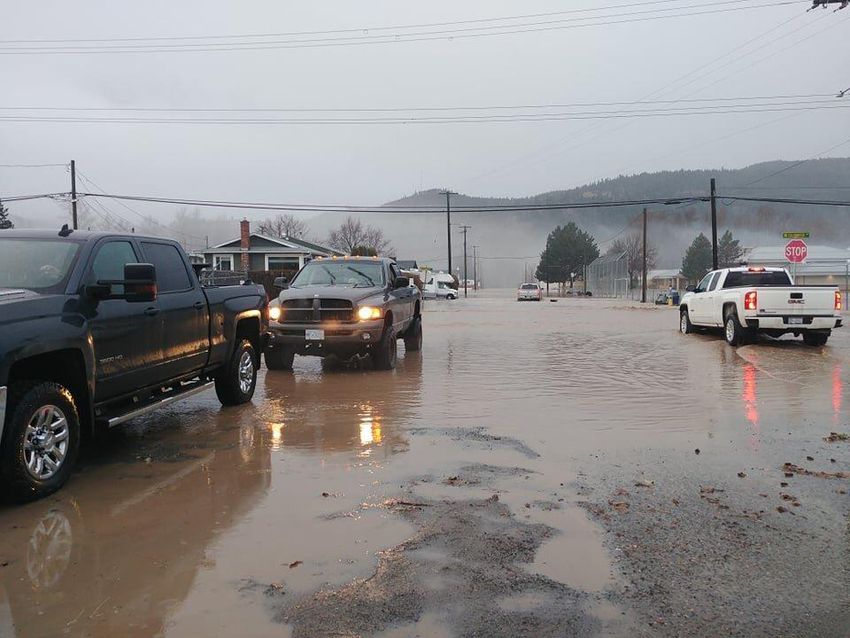 The entire town of Merritt has been ordered to evacuate due to extreme flooding.  SUPPLIED BY RYAN YEADON

Janice Chan, meanwhile, stood on the sidewalk eyeing the floodwaters in front of her home. There was a speck of blue sky further to the west and the rain had stopped, for now, but the water was still slowly inching toward her two-storey house.

Flooding has come close before but had stopped at the railway tracks a few blocks away, she said. But on Monday, between the early morning and late afternoon, the level kept rising.

“It’s pretty close,” Chan said, as 10 metres away her neighbour’s plastic garbage cans began to float. “I’m very worried actually, I didn’t expect this to happen. I didn’t think it would ever happen.” 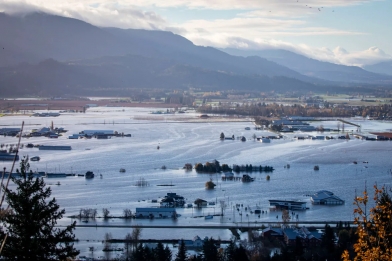