Subscribe successfully!
Why Flood Victims Blame Their City, Not the Climate 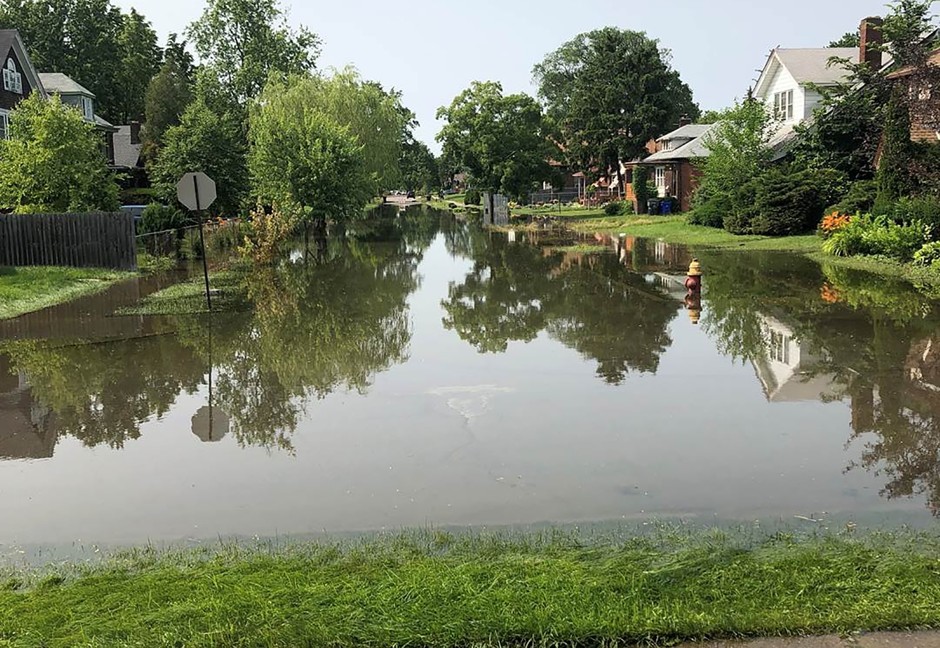 In July, Detroit River and canal water pouring over and through seawalls flooded streets, homes, and basements on Detroit's east side. The U.S. Army Corps of Engineers said three months of abnormally wet weather kept stream flows into the Great Lakes well above average. Corey Williams/AP

The city of Detroit is pouring millions into the Jefferson Chalmers neighborhood on the city’s east side, to bring in affordable housing, a new grocery store, and enhancements to waterfront parks. It also plans to build out rain gardens and solar arrays.

But all of that was of little concern when residents’ basements flooded for the umpteenth time this summer, which people chalked up to the city’s faulty drainage-system maintenance and misguided priorities.

As resident Allison Key told local radio station WDET: “This neighborhood just got $5 million in grant money, and there’s all these plans to do things to improve the neighborhood. But if everyone who lives on the water that can’t afford to fix it has to leave, then what’s the point?”

This is the kind of response that Christine Carmichael, a postdoctoral fellow at the University of Vermont, also got when she talked with Detroit residents about why their homes kept flooding. Although we typically hear about flooding in southern and eastern coastal cities, usually from hurricanes, there have been more and more urban flooding events in inland cities, and this will continue due to climate change. Government officials often blame homeowners themselves for the problem. The U.S. Army Corps of Engineers states on its website: “The primary responsibility for protecting homes and property from flood damage rests with the individual.”

The Detroit residents Carmichael spoke with were more prone to blame ineffective local government operations for their flooding problems. Jefferson Chalmers was one of several neighborhoods where she interviewed residents. She collected responses between December 2017 and April 2018, a few years after the massive 2014 rainstorms that flooded Detroit so badly that President Barack Obama declared a federal disaster. Even back then, residents were placing heavy blame on the city’s poor handling of drainage infrastructure.

Few of them mentioned to Carmichael that climate change is affecting the severity of recent rainfalls and flooding. Trapped greenhouse gases and heat in the atmosphere have led to more rain, falling more ferociously over longer sustained time periods. This has spelled flooding disaster for urban areas with a lot of paved lots and impermeable surfaces, such as Detroit.

Yet therein lies a problem that Carmichael recognized in her study: Respondents were less likely to cite climate change as a cause for the flooding, mainly because the ineptitude of local government and faulty infrastructure were the things staring them smack in the face, from their own backyards and basements.

“You have government and their partner organizations that are trying to advocate for acting on climate change—like the cities that said, ‘We are still in’ [the Paris climate agreement],” said Carmichael. “The problem in this case is that we are uncovering residents’ perspectives, and their main issue is that the government has not been properly managing environmental conditions in their urban neighborhoods leading up to now. That sets up a situation where, if that conflict has not been resolved, then that’s going to spill over into when city government and their partners try to get residents involved in acting on climate change.”

In Carmichael’s study, the people who blamed local government for the continued flooding fell into three camps, in terms of climate change: They were climate skeptics; or they believed climate-change science, but were skeptical about its connection to their flooded houses; or they believed climate science and thought it was connected to the floods, but were unsure to what degree.

No matter the camp, though, they were all convinced that the flooding had more to do with what their government wasn’t doing: fixing the drainage and modernizing the sewer system. At least in Detroit, city-government failures seem to be preventing people from taking climate change into account.

Carmichael found that the hangups around government were driven by “heritage narratives.” Carmichael defines a heritage narrative as “an account of a community’s origins and an explanation of how it developed into its current state in terms of culture, economy, politics, and the natural and built environment.”

A prior study that Carmichael conducted in Detroit showed how heritage narratives were informing residents’ curious decisions to reject the city’s offers to plant trees for free in front of their houses. Like the rain gardens in the city’s plans for Jefferson Chalmers, this was also a proposal to address climate change. But in both cases, Carmichael found resistance, due in part to distrust of how city officials have operated in the past, particularly among black and low-income residents.

For these residents, as Carmichael writes in her forthcoming study, co-authored by University of Vermont professors Cecilia Danks and Christine Vatovec, to be published in the journal Environmental Communication:

Flooding was inextricably linked to heritage narratives about government mismanagement of riverine or sewage systems historically and presently. Respondents perceived a failure of government entities to take appropriate actions to mitigate flooding, forcing residents to take action and/or express frustration at decisions made. Some of these residents minimized the influence of climate change on flooding, while others felt climate change exacerbated issues with local infrastructure and land management.

Some of this government mismanagement includes a legacy of ignoring or failing to prioritize residents’ proposals in city-formed solutions, or failing to communicate how exactly the city incorporated residents’ concerns into those solutions, Carmichael found. Consider the quote that Allison Key gave to WDET, questioning the utility of the $5 million for neighborhood improvements. It mirrored a response Carmichael received in 2018 from a resident who was critical of Detroit’s management of its sewage infrastructure:

Of course, people always say, “Lack of resources,” but then you’ll turn around and you see them put a resource behind something that they’ve deemed important. … You have poor southwest Detroit, that’s the most polluted place in the country. We give so much to businesses and so little to people.

It wasn’t just black neighborhoods in Detroit where Carmichael encountered these responses. She also surveyed people in Waterbury, Vermont, where the demographics are much whiter and wealthier, and found similar heritage narratives focusing on poor local-government stewardship. Similarly, when talking to white residents who had recently located to the Detroit neighborhoods in her study area, she found that they had adopted many of the same heritage narratives as black folks who had lived in the communities for longer periods.

Nor do such heritage narratives only hold sway in the North. In New Orleans, it’s difficult to talk about climate change when levees aren’t holding up and entire cars are discovered inside the drainage canals. In Miami, climate and environmental advocate Nancy Metayer said people acknowledge that the city is mostly a low-lying coastal area dealing with shoreline erosion and sea-level rise caused by climate change. But she also says that doesn’t completely explain Miami’s flooding problems.

“Miami-Dade’s infrastructure is outdated and cannot withstand the impacts of climate,” Metayer said. “From my professional opinion, they are not moving fast enough, and if they are addressing it, it’s to deal with cosmetic issues.”

Carmichael’s study recognizes the need for city planners and policymakers to draw up climate-change proposals and sustainability plans to address flooding, but says those plans need to incorporate the perspectives and narratives of residents as they understand flooding events as well.In other words, the heritage narratives don’t disappear just because an innovative rain-garden project emerges. Carmichael heard from her respondents that government officials will have to communicate more effectively and transparently about how plans are addressing the specific, long-standing structural needs of residents, especially in disenfranchised communities.

Our study emphasizes how uncertainty associated with recurrent household flood events, combined with repeated economic and emotional stressors, may greatly reduce one’s capacity to prevent and manage risks at the household level. These residents’ narratives specifically do provide innovative but practical suggestions including the promotion and content of flood preparedness toolkits or simple strategies to reduce exposure such as ‘basement shoes.’ Our research re-emphasizes that flood-related risk communication campaigns must entail targeted messages that fully recognize social determinants of health, especially in under-resourced communities.

The science says that urban flooding isn’t going away anytime soon. Neither are the narratives that inform how people understand that flooding. It might take work to get some residents to take the long view on these problems, but as Carmichael found, they won’t get to that point until cities deal with “all the entangled conflicts leading up to that point”—when the water actually collects in the basement.

“The government entities are often coming at it with [an attitude of], ‘Let’s just not talk about the legacies of government mistrust with environmental management. Let’s just talk about how we can work together,’” said Carmichael. “But the residents I talked to [were saying] no, because they believed that the government’s mismanagement is still playing a part in these flooding issues. So we need to talk about that and not just talk about climate change as if it’s happening outside of all of these legacies.” 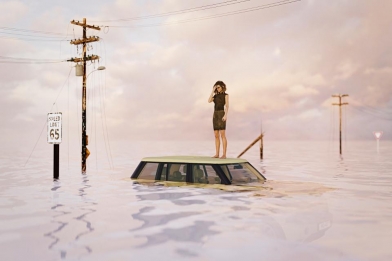 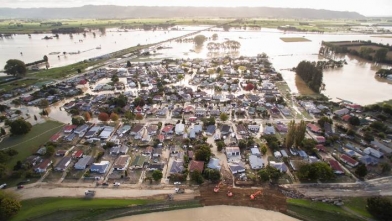 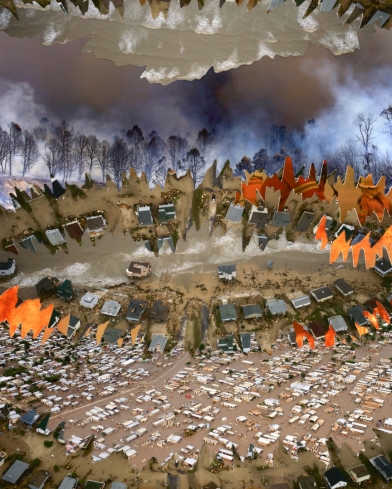 What Happens If a ‘Big One’ Strikes During the Pandemic?