Marilyn Penner, Allan Toop and Nora Weber have spent a combined 170 years living in the eastern Fraser Valley. Toop's and Penner's families have been farming the land for more than three generations, while Weber has lived on the same village corner for well over a decade.

All three agreed Monday they've never seen flooding happen the way it did this week.

"We get maybe a snowfall, then a freezing, then a thaw and that's when we have a lot of flood problems," Toop, 90, said in an interview from his family farm in the Yale area of Chilliwack, B.C.

"I can't remember a flood resulting from just a matter of rainfall."

Entire communities in the Fraser Valley, east of Vancouver, were overwhelmed by surging water on Sunday in one of the province's most severe flooding disasters in decades.

Roads collapsed and fell apart. Hundreds of stranded people had to be rescued by helicopter as cars disappeared into the muck. Houses were pummeled so badly, one meteorologist said it looked more like they'd been hit by a car rather than water.

Some level of flooding is a recurring part of life in parts of the valley, a relatively flat area named for the temperamental Fraser River and surrounded by steep mountain ranges. Experts agree what's happened this week is exceedingly rare but warn they expect these rarities could become more common and more intense as the planet warms. 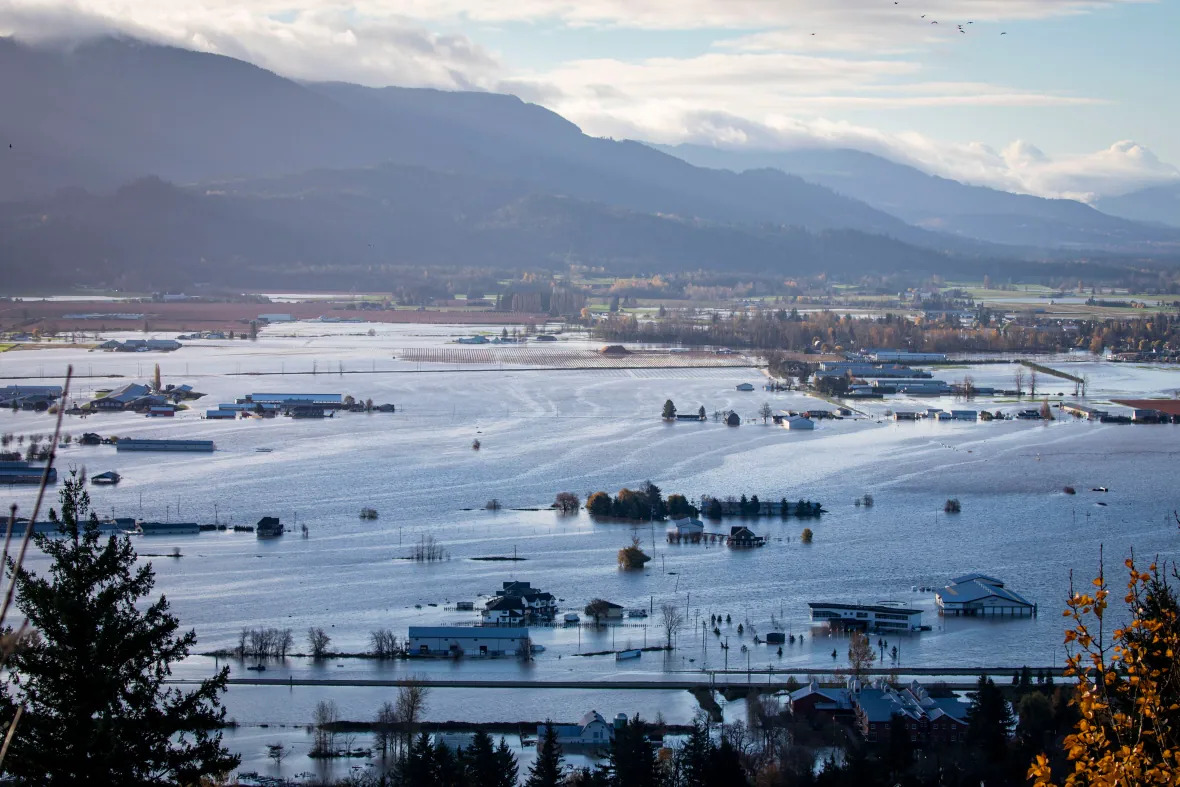 Homes and farmland in the community of Sumas Prairie are submerged amid flooding in Abbotsford on Tuesday. (Ben Nelms/CBC)

Floods in the Fraser Valley typically happen when unusually warm spring weather quickly melts an unusually large snowpack, sending an immense amount of snowmelt running into the valley and overwhelming the Fraser River.

This flood is different: it happened because nearly a month's worth of rain poured into the region in less than two days after what was already an unusually rainy September and October.

The rain fell so furiously, it overwhelmed small rivers and creeks that wouldn't normally be considered for flood risk. The earth in the area, already soaked to its limit, couldn't absorb the overflow.

The corn fields on Penner's five-acre family farm soon turned into a swamp. The property lies in the low-lying Sumas Prairie on what was once the bed of Sumas Lake, a shallow body of water drained roughly 100 years ago to make way for agricultural land. 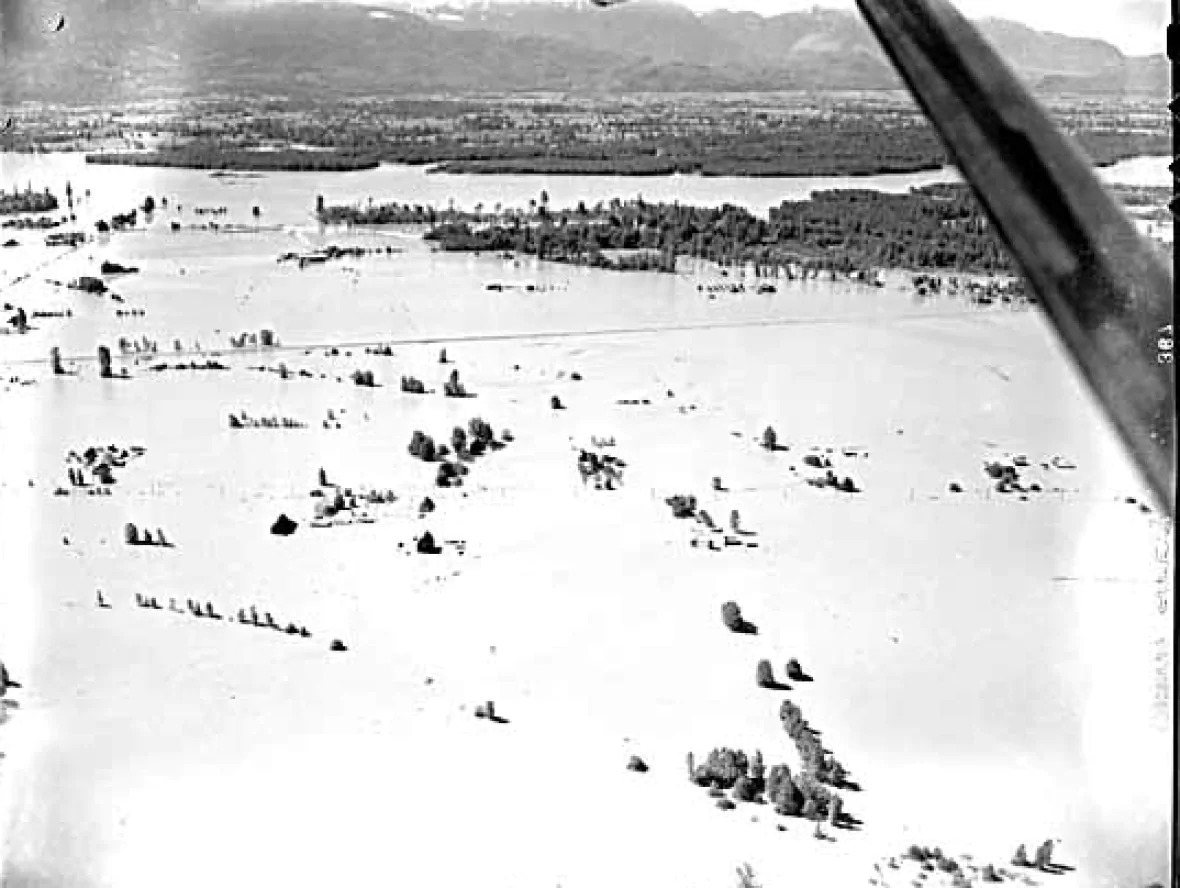 Farm lands became a sea during the flood of 1948. (VPL Archives)

Toop, in his own right, has become an expert on local floods over his nine decades on the farm; he can't miss them, since his basement fills with water virtually every time.

The fourth-generation farmer remembers being 17 years old, fresh from his high school graduation, watching a sea of murky water swallow several communities in the valley during the catastrophic spring flood in 1948.

He said the latest flood doesn't compare to what happened that year, but it still stands out.

"This is very, very unusual," he said.

Experts are hesitant to link any single weather event directly to climate change, but scientists know warmer air holds more moisture — which means any given storm on a warmer planet will produce more rain.

For every 1 C degree of warming, the air can hold around seven per cent more moisture. 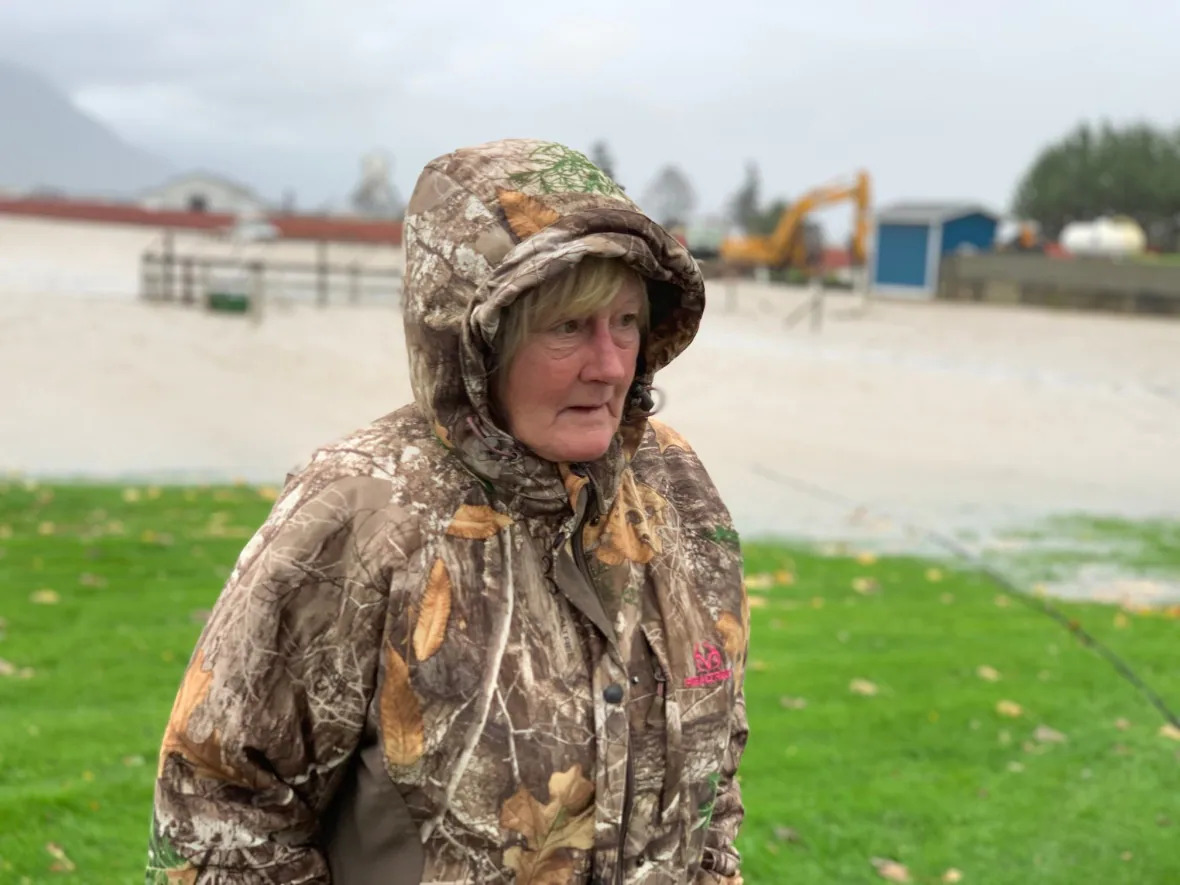 Marilyn Penner stands in front of the flooded corn field on her family's farm in Sumas Prairie on Monday, (Yvette Brend/CBC)

The global temperature has increased by 1.2 C since industrialization, according to the World Meteorological Organization. A 2019 report commissioned by Environment and Climate Change Canada found the country is warming twice as quickly, with British Columbia seeing some of the highest rates of change.

"This is the kind of thing that we certainly expect with climate change — the intensity of the landslides and floods could become worse," said Brent Ward, an earth sciences professor and co-director for the Centre for Natural Hazards Studies.

"We would expect to get more frequent atmospheric rivers" — currents that bring large amounts of water vapour north from the equator — "and when we get these atmospheric rivers, they'll probably be bigger," he said.

Environment Canada said 24 communities across the province, including Abbotsford, received more than 100 millimetres of rain between 11 a.m. Saturday and 11 p.m. Monday.

Agassiz, Chilliwack, the Coquihalla summit and Squamish topped 200 millimetres. Hope received the most of all at 252 millimetres.

"Something to consider as we go forward in the next decades ... is what's consistent with climate change projections, how atmospheric rivers will become more potent and perhaps longer lasting than what we even saw this weekend," Armel Castellan, a warning preparedness meteorologist with the agency, said Tuesday.

The provincial government defended its response to the crisis on Monday despite criticism about the speed of the response and level of communication to hundreds of people who were left stranded.

Ward said officials at the local and provincial level will need to re-examine preventative planning, flood protection and overall infrastructure through the lens of a changing climate as they move to rebuild communities and repair major highways.

Existing dikes and culverts, he explained, were likely made to outdated climate standards and will be too small to withstand stronger, fiercer storms. The same could go for ditches running alongside critical highways, like Highway 1, which was originally built in the early 1960s.

"I think what we're dealing with is complications of global warming," said Nora Weber, who's lived in the riverside Clayburn Village area of Abbotsford for more than 15 years and saw her street become a river on Sunday.

"I think infrastructurally, every city in every part of B.C. has to be much better prepared." 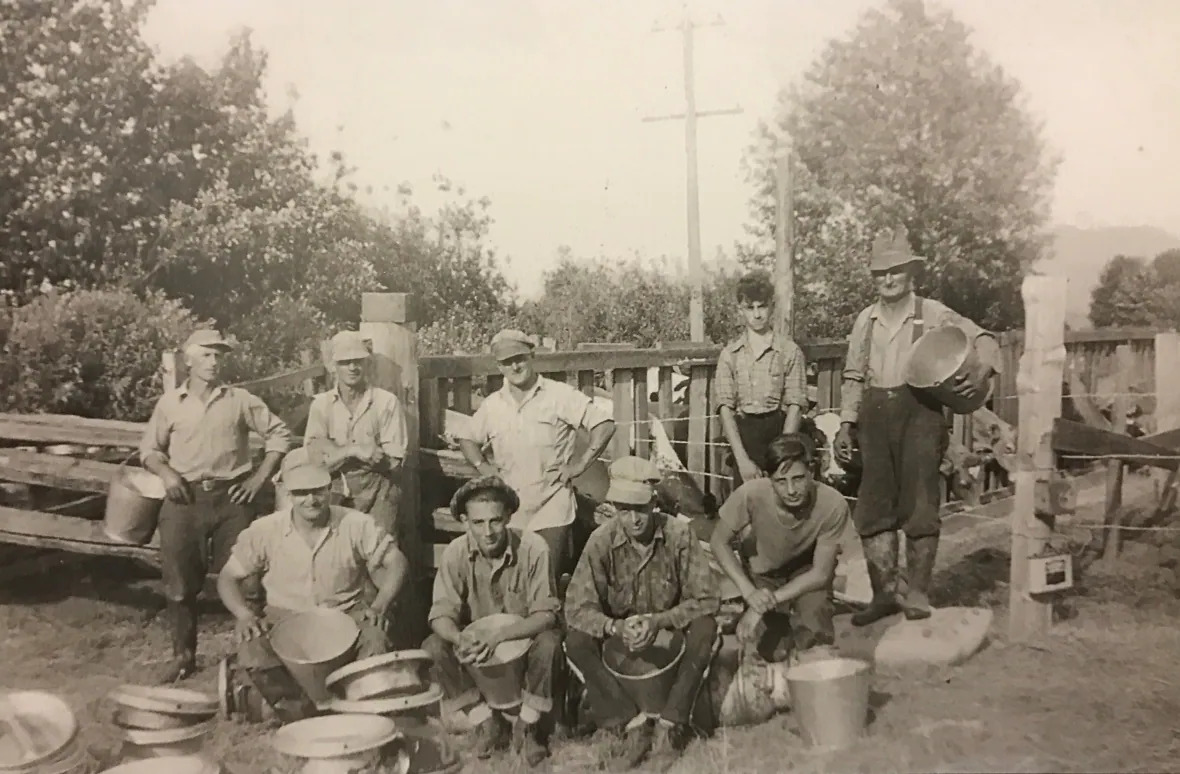 The Toop family after milking their cattle by hand on high ground near their farms in Chilliwack during the flood of 1948. Allan Toop (front row, second from left), was 17 at the time. (Submitted by Allan Toop) 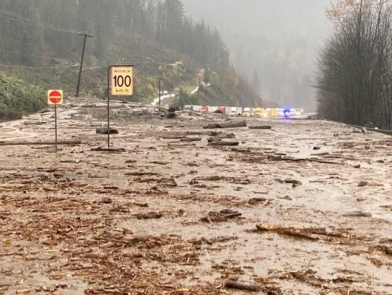 First fires, now floods: Why B.C. is caught in a horrific dance between climate extremes