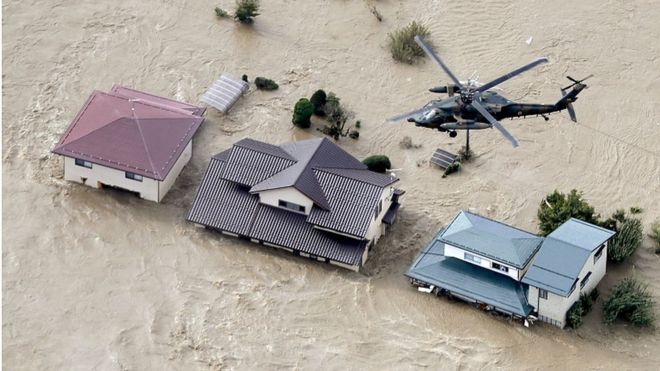 At least nine people are reported dead as Japan recovers from its biggest storm in decades.

Typhoon Hagibis triggered floods and landslides as it battered the country with wind speeds of 225km/h (140mph).

Rivers have breached their banks in at least 14 different places, inundating residential neighbourhoods.

The storm led to some Rugby World Cup matches being cancelled but a key fixture between Japan and Scotland will go ahead on Sunday.

Hagibis is heading north and is expected to move back into the North Pacific later on Sunday.

It made landfall on Saturday shortly before 19:00 local time (10:00 GMT), in Izu Peninsula, south-west of Tokyo and moved up the east coast. Almost half a million homes were left without power.

In the town of Hakone near Mount Fuji more than 1m (3ft) of rain fell on Friday and Saturday, the highest total ever recorded in Japan over 48 hours. 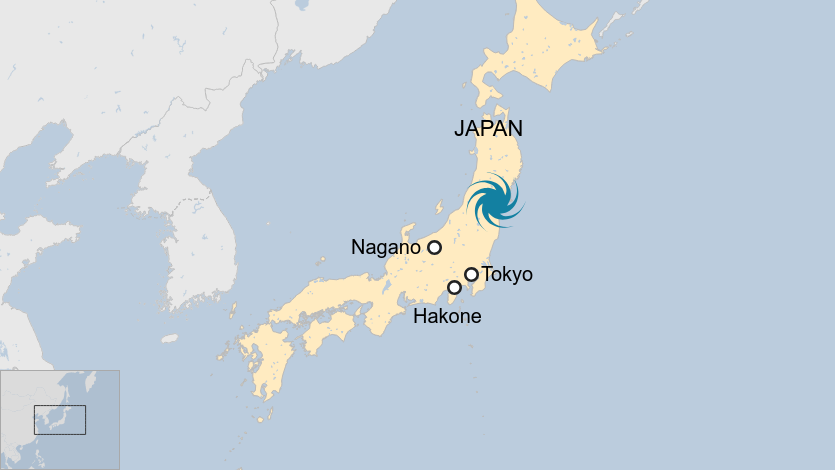 Officials said some of those killed were swept away by landslides while others were trapped in their cars as floodwaters rose. Another 15 people are listed as missing and dozens are reported injured.

What preparations were made?

More than seven million people were urged to leave their homes as the huge storm approached, but it is thought only 50,000 stayed in shelters.

Many residents stocked up on provisions before the typhoon's arrival, leaving supermarkets with empty shelves. 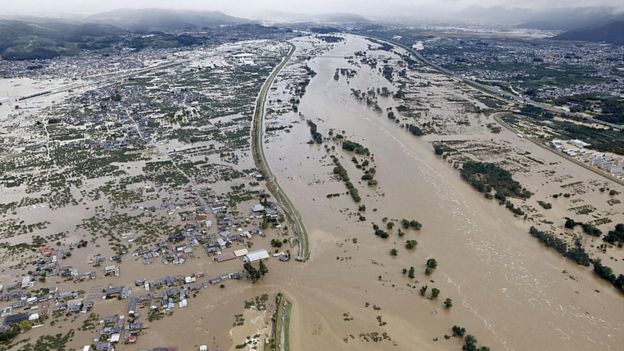 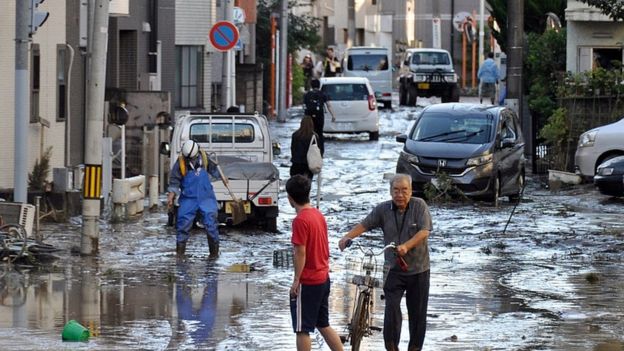 "Unprecedented heavy rain has been seen in cities, towns and villages for which the emergency warning was issued," Japan's Meteorological Agency (JMA) forecaster Yasushi Kajiwara told a press briefing.

Many bullet train services were halted, and several lines on the Tokyo metro were suspended for most of Saturday.

All flights to and from Tokyo's Haneda airport and Narita airport in Chiba have been cancelled - more than 1,000 in total. 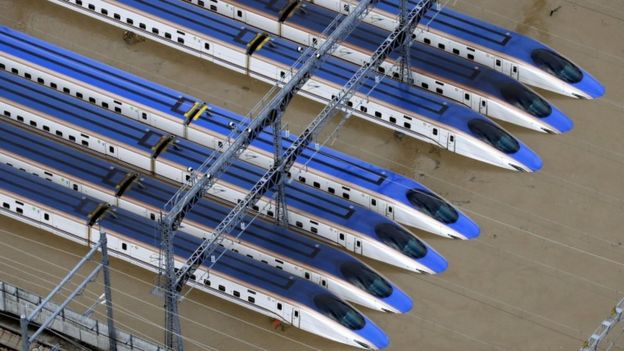 Two Rugby World Cup games scheduled for Saturday were cancelled on safety grounds and declared as draws - England-France and New Zealand-Italy. The cancellations were the first in the tournament's 32-year history.

Sunday's Namibia-Canada match due to take place in Kamaishi was also cancelled and declared a draw.

The US-Tonga fixture in Osaka and Wales-Uruguay in Kumamoto will go ahead as scheduled on Sunday, organisers said.

Meanwhile, a crunch game between Scotland and tournament hosts Japan on Sunday will now go ahead. The decision followed a safety inspection.

The Japanese Formula One Grand Prix is also taking place on Sunday.

'A blanket and a biscuit'

Local resident James Babb spoke to the BBC from an evacuation centre in Hachioji, western Tokyo. He said the river near his house was on the brink of overflowing.

"I am with my sister-in-law, who is disabled," he said. "Our house may flood. They have given us a blanket and a biscuit." 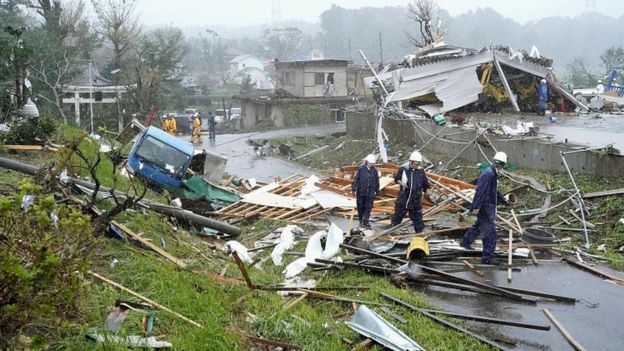 Andrew Higgins, an English teacher who lives in Tochigi, north of Tokyo, told the BBC he had "lived through a few typhoons" during seven years in Japan.

"I feel like this time Japan, generally, has taken this typhoon a lot more seriously," he said. "People were out preparing last night. A lot of people were stocking up."

Only last month Typhoon Faxai wreaked havoc on parts of Japan, damaging 30,000 homes, most of which have not yet been repaired.

"I evacuated because my roof was ripped off by the other typhoon and rain came in. I'm so worried about my house," a 93-year-old man told NHK, from a shelter in Tateyama, Chiba.

Japan suffers about 20 typhoons a year, but Tokyo is rarely hit on this scale. 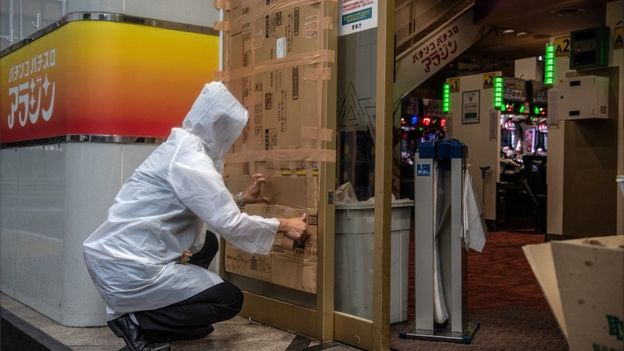 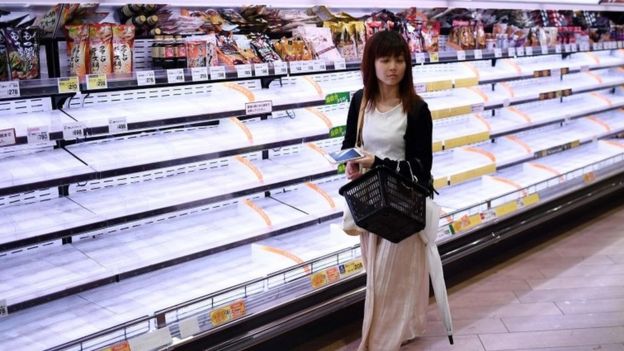 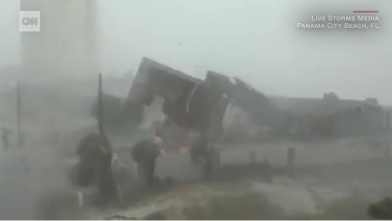 Why Hurricane Michael is a monster unlike any other 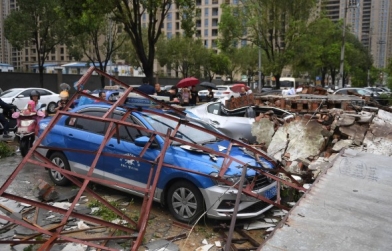 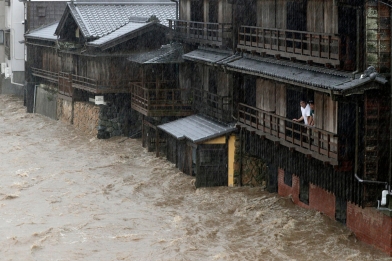