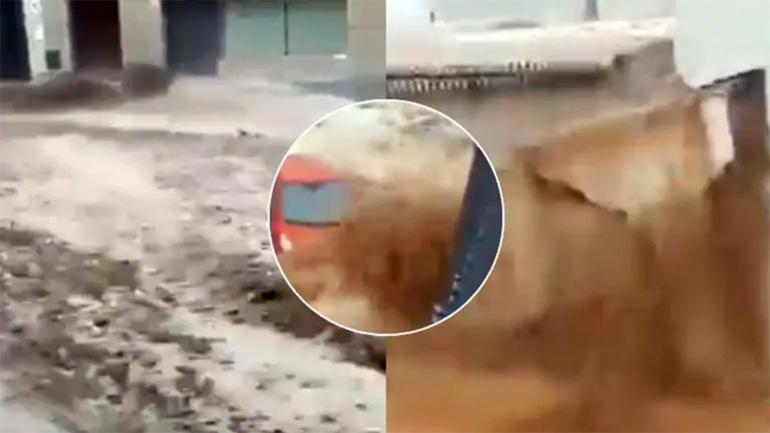 Monsoon has arrived. Severely waterlogged streets, collapsing houses and cars washing away in floods -- such visuals are doing rounds on social media but shockingly they are not from Mumbai, Kerala, Assam or any other part of India. These visuals show submerged streets of Estepa village in Spain's Seville region.

According to reports, Seville on Tuesday received three months worth of rain in 20 minutes.

Walloped by thunderstorms and hailstones, the town of Estepa is now hit by flash floods with water gushing through the streets.

One purported video shows a house collapsing due to the sudden surge of water in a matter of seconds. Thereafter, the rubble combined with the high-speeding water washes away a car which then smashes into other cars as it floats through the streets.

Another video shows the floodwater entering streets and inundating everything in its path.

Estepa was one of the worst affected areas hit by the deluge in Spain.

According to local news, Spain’s Aemet weather agency sounded a yellow alert since Monday in Seville’s Sierra Sur area. Surprisingly, around 4 pm on Tuesday, the level was raised to orange. Emergency services were sent to the affected areas to deal with the flood situation.

The incessant rainfall also caused problems in Herrera and in some parts of the Córdoba province, including the capital city, which reported around two dozen incidents.

In India, these kinds of scenes are often seen in Maharashtra, Kerala, Bihar and Assam -- states which experience incessant rains every year during the monsoon season. Lakhs of lives get affected and heavy property damage occurs as rain, thunderstorms and winds lash these states rainfall every.

Meanwhile, the situation remains grim in Nepal as well. The Himalayan country has recorded 198 deaths due to landslides and floods triggered by pre-monsoon and monsoon rains since late May, while in neighbouring India, 134 people have died in the states of Assam and Bihar, though floodwaters have now receded in most places, Reuters reported.

Also, according to news agency Associated Press, more than a week of torrential rain in South Korea left at least 30 dead and 12 missing in landslides, floods and other incidents, the government said on Sunday while warning of a further downpour.