Subscribe successfully!
Vancouver Is Marooned by Flooding and Besieged Again by Climate Change 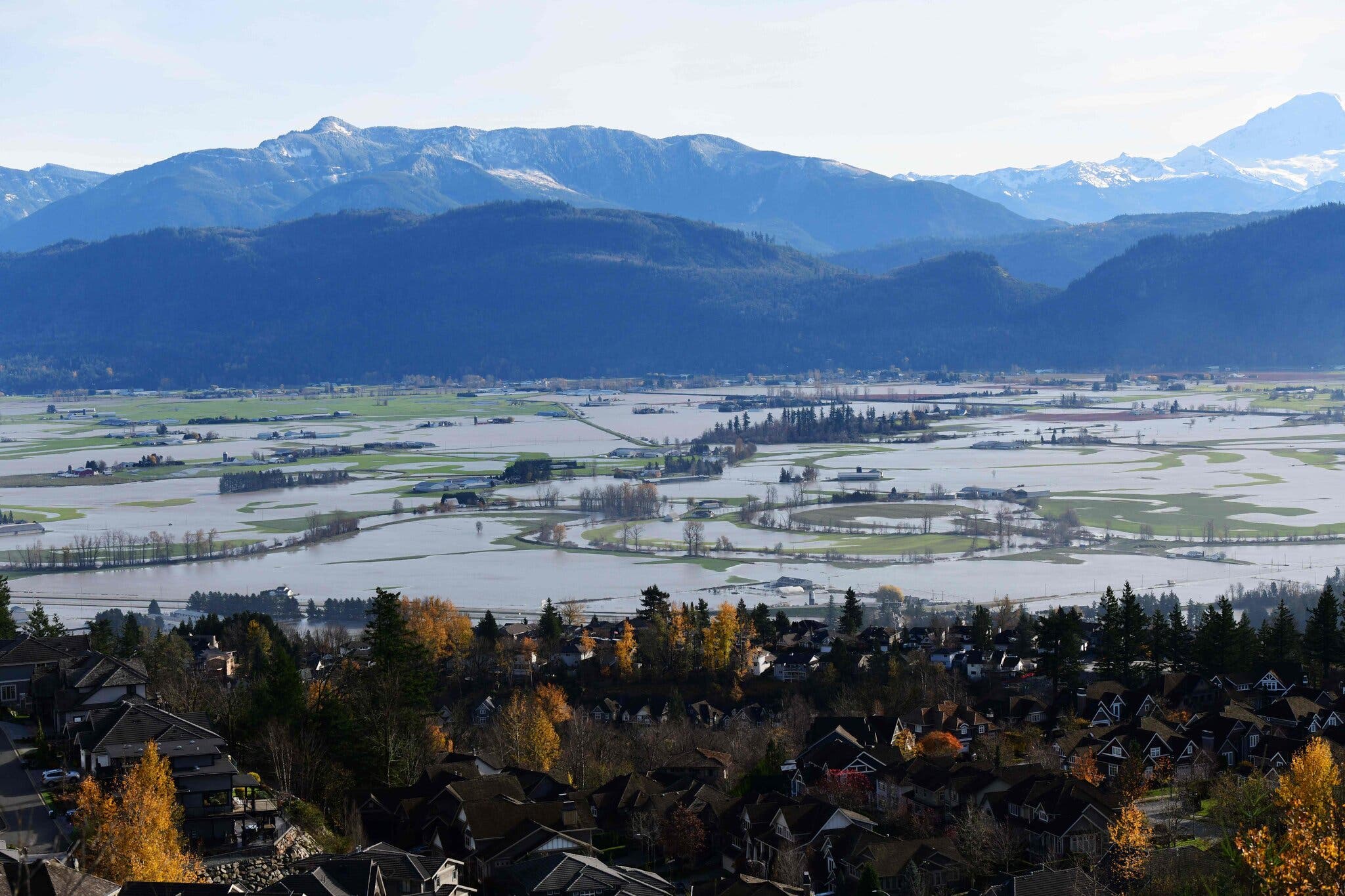 The intense rains and heavy winds that descended last week on British Columbia, the Canadian province known for its mountains, coastline and majestic forests, forced 17,000 people from their homes, emptying entire towns and inundating farms.

Vancouver, Canada’s third-largest city, lost its road and rail links to the rest of the country, cut off by washed-out bridges and landslides.

It was the second time in six months that the province had endured a major weather-related emergency, and experts say the two disasters are probably related to changes in the climate.

British Columbia has been besieged this year by record-breaking heat, wildfires and floods. The disasters have killed hundreds — including three people in the recent rains — and caused hundreds of millions of dollars in damage. The impact has rippled across Canada after hobbling the province and the port of Vancouver, which is vital to the country’s economy.

“In the last six months, B.C. has both burned and drowned,” said Merran Smith, the executive director of Clean Energy Canada, a climate program at Simon Fraser University in Vancouver. “So there’s really no greater evidence of climate change right now than here in British Columbia.” 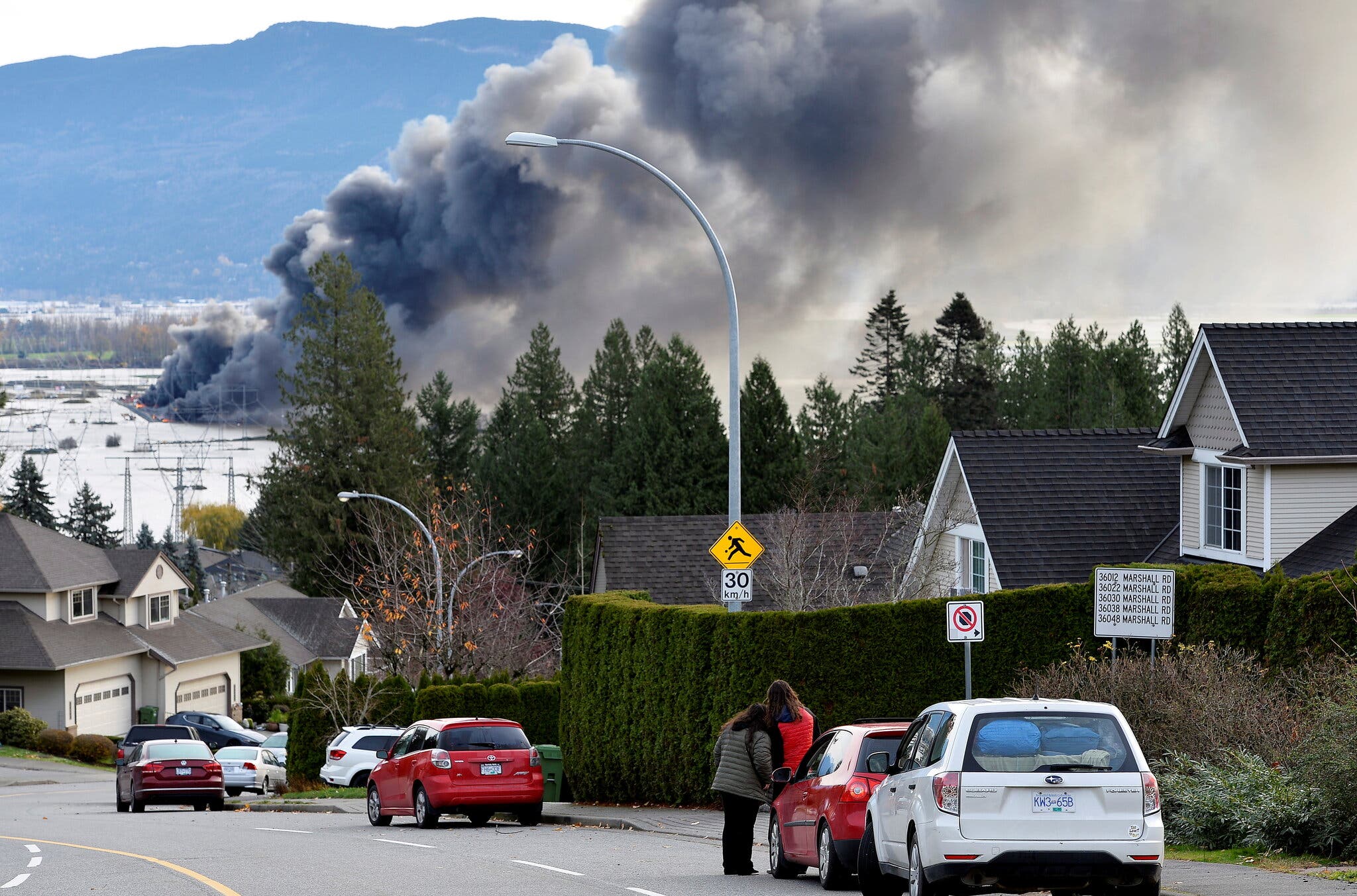 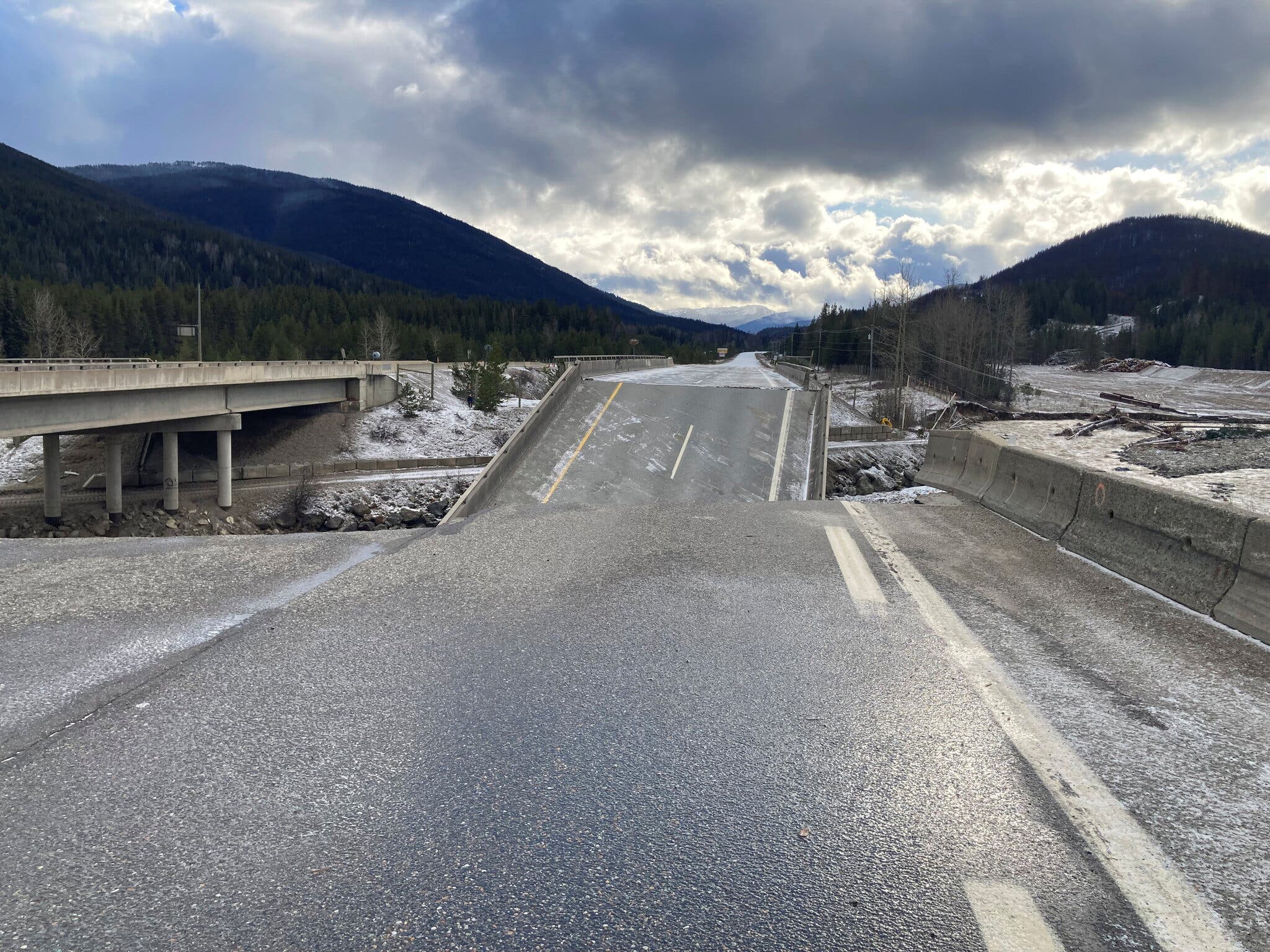 In July, record temperatures as high as 121 degrees Fahrenheit brought drought and uncontrollable wildfires. The heat, which was concentrated in the province’s interior, killed 595 people from June to August, and fire consumed an entire town.

The floods last week have spared more lives but have destroyed vital infrastructure and left freight to pile up at Vancouver’s port, Canada’s gateway to Asia. The country’s supply lines have been disrupted as well at a time when American ports are too backed up to offer much help.

A drought can dry out vegetation, which in turn can fuel and intensify fires. Fire itself can weaken or kill plants and make the soil less permeable, meaning that rain is more likely to run off rather than soak in, causing flash floods and landslides. 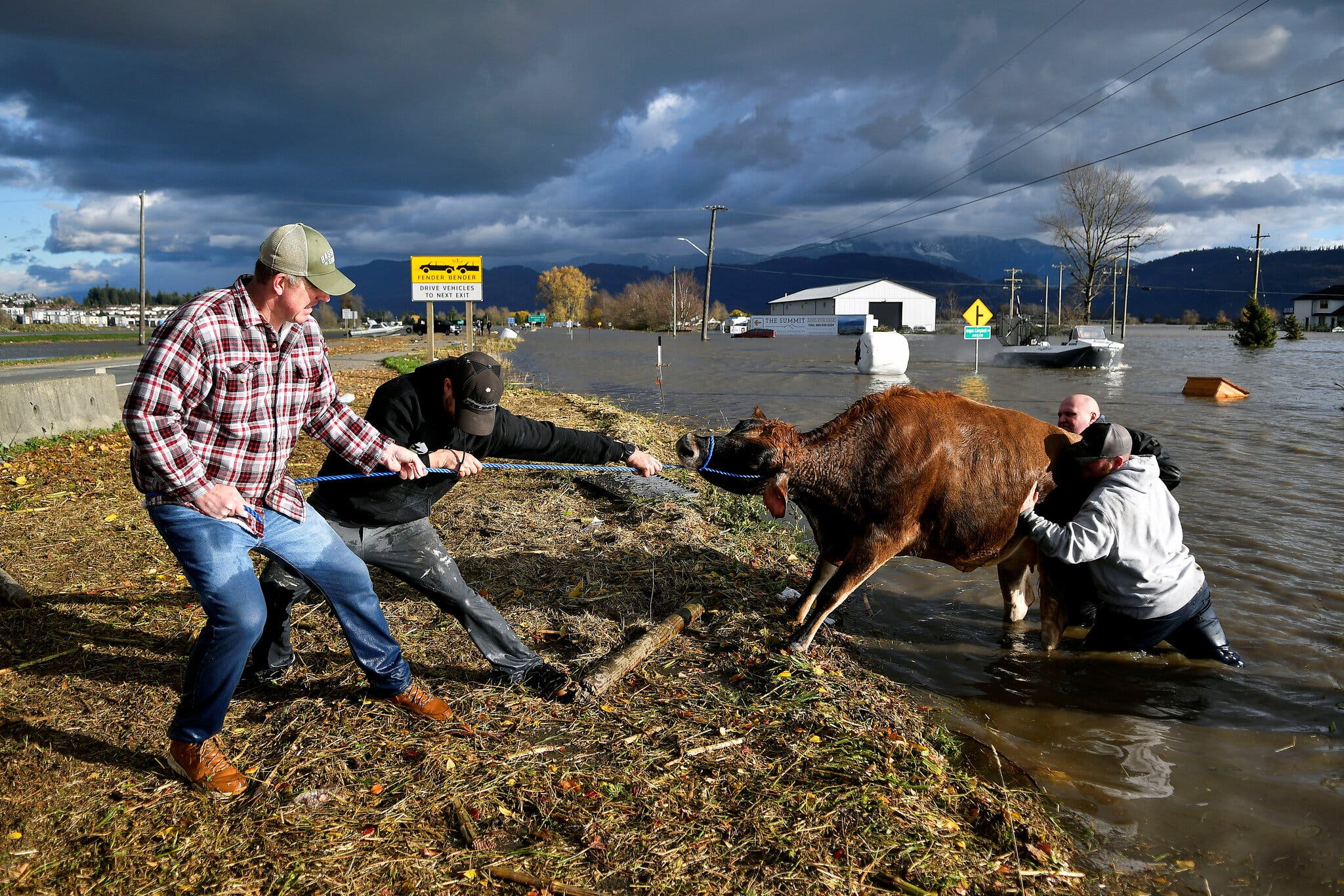 Rescuing cows that were stranded in a flooded barn in Abbotsford.Credit...Jennifer Gauthier/Reuters 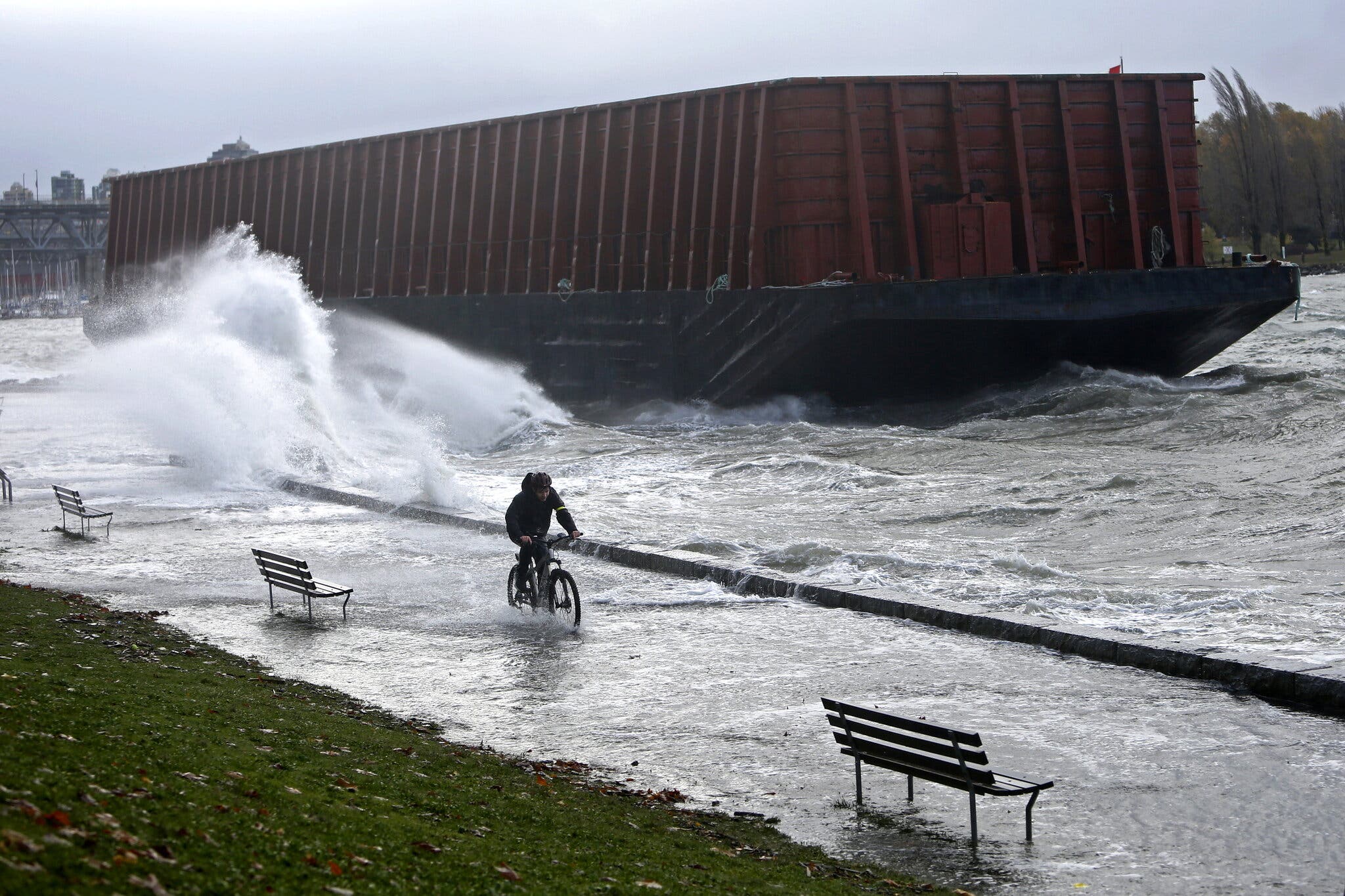 A barge came loose from its mooring and crashed ashore after rainstorms in Vancouver.Credit...Jesse Winter/Reuters

Rachel White, a professor at the University of British Columbia who studies how large-scale atmospheric patterns contribute to extreme weather, said it was impossible to say for sure whether the extraordinary heat and the devastating rains resulted directly from climate change.

“We need to do more research to really try and understand what’s going on here,” she said. “Is this also a sign of climate change or did British Columbia just get incredibly unlucky this year?”

However, she said, one thing is certain: “These events were made worse because of climate change.” 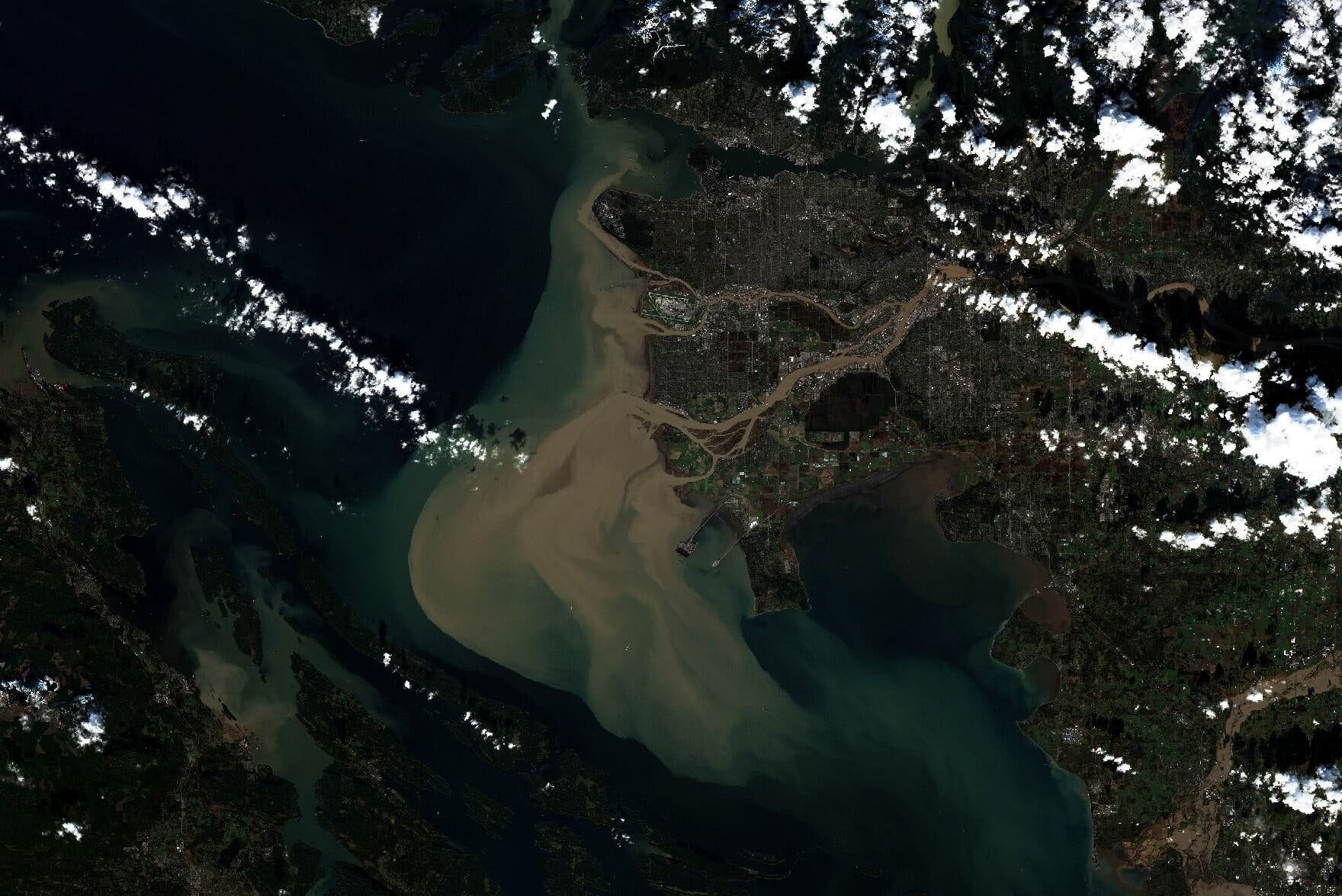 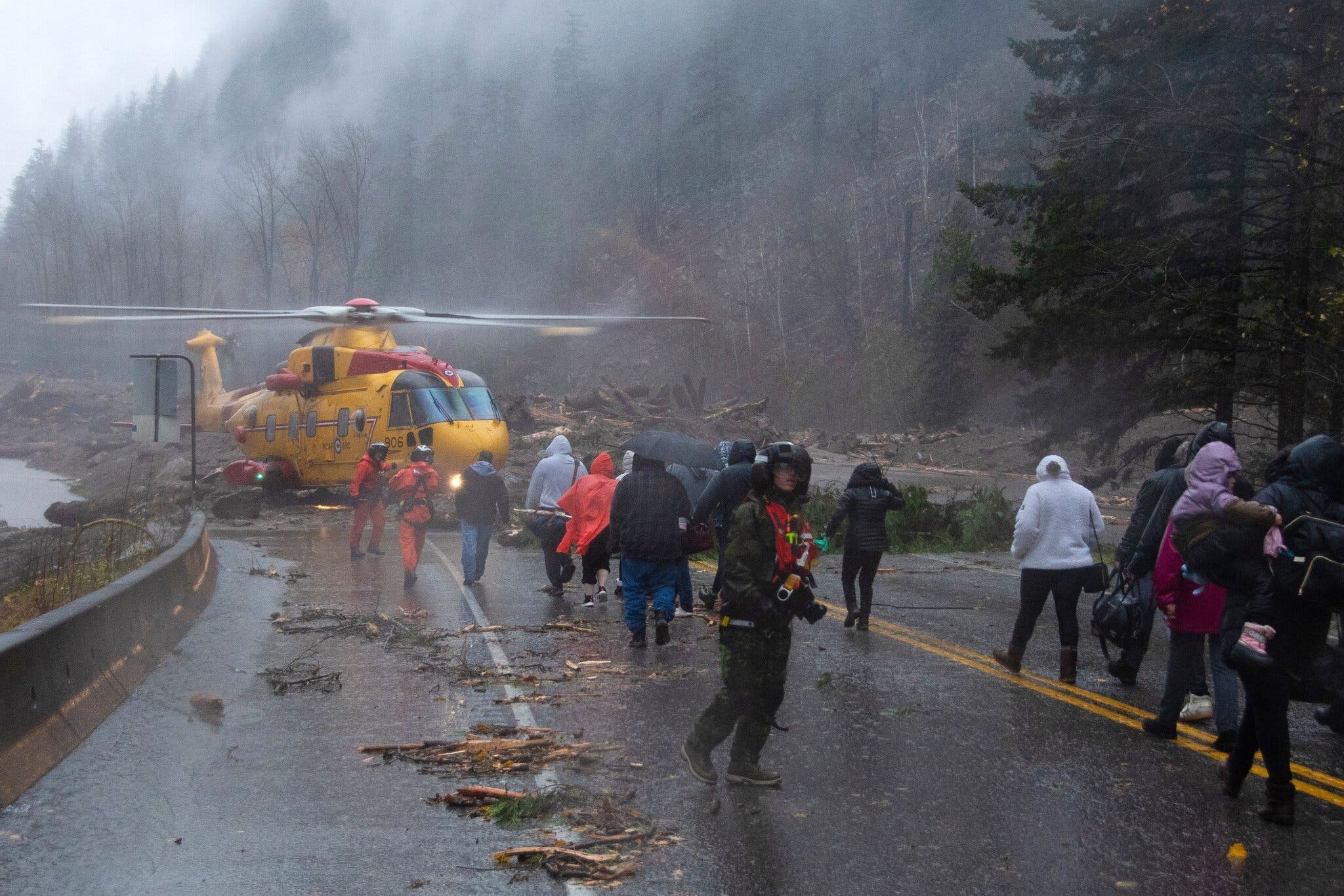 A common weather event known as an “atmospheric river” led to the province’s devastating flooding and set rainfall records in several communities. A moisture conveyor belt, perhaps better known as the Pineapple Express, it is a relatively narrow but very long band of fast-moving, moisture-laden air that forms in the Pacific Ocean near Hawaii.

Normally, such systems release that moisture as intense rain once they reach British Columbia’s coastal mountains and peter out before they enter the dry interior region on the other side. But this atmospheric river was different, said Armel Castellan, a meteorologist with the weather service at Environment and Climate Change Canada.

“This had so much potency to it that it was able to ride up those mountains and really unleash into what is otherwise the dry belt,” he said.

Alex Hall, a professor of atmospheric science at U.C.L.A., added that the phenomenon was notable for its scale. The interior town of Hope, for instance, was hit with 11.6 inches of rain in 52 hours, about a third more than the amount of rain it usually receives in all of November.

“What’s not normal is to have atmospheric river events that are this large,” he said, adding that in terms of rainfall, these events “are nearly equaling the historic record.”

Because the interior region had already had an usually wet fall, the ground was saturated before the storm hit, Mr. Castellan said. Compounding the situation, there was relatively little snow at higher altitudes to soak up water. In addition, the summer of extreme heat, drought and wildfires had left little vegetation to slow or prevent mudslides.

“When you have those sequences set up right, you produce even more extreme conditions,” Dr. Hall said. 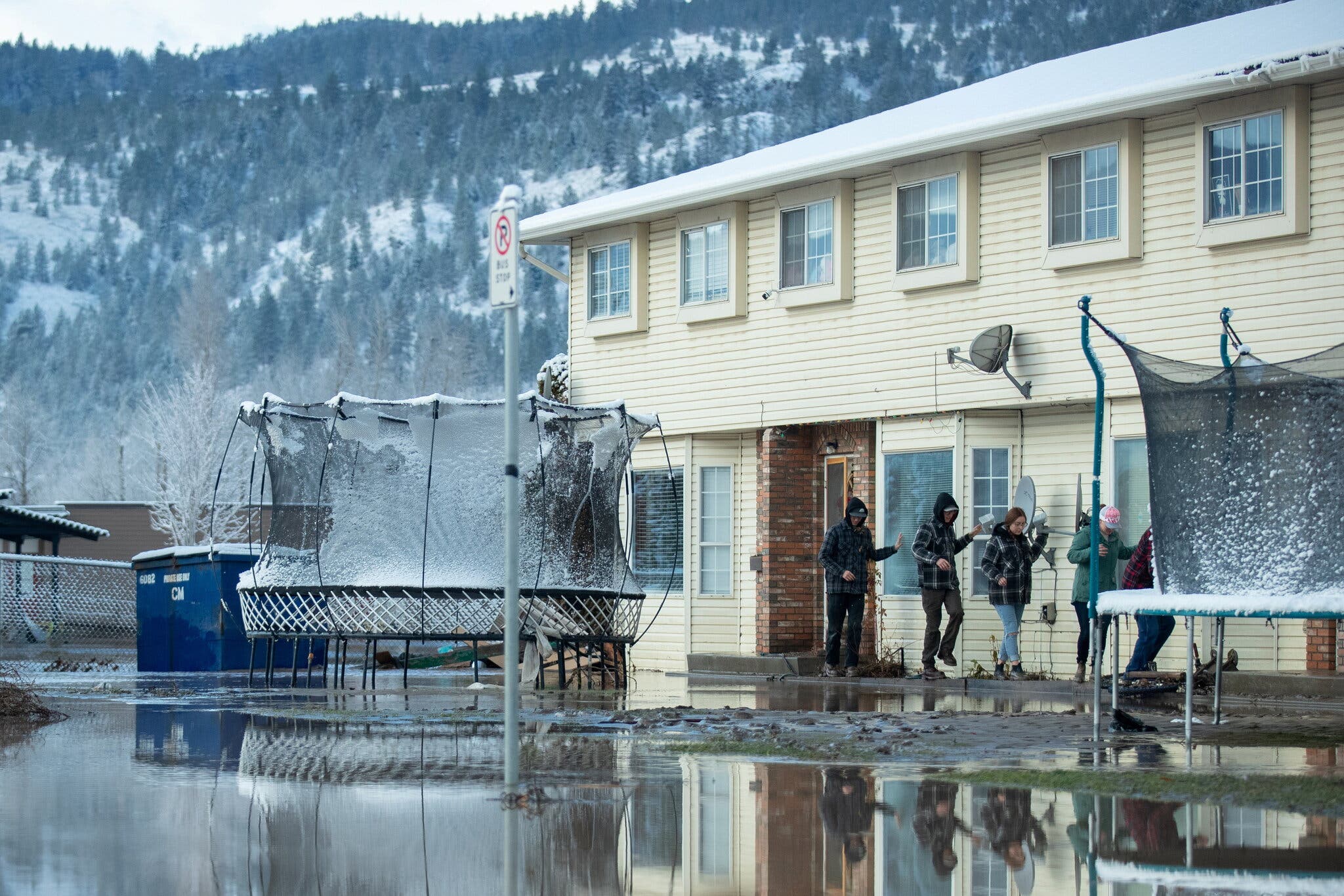 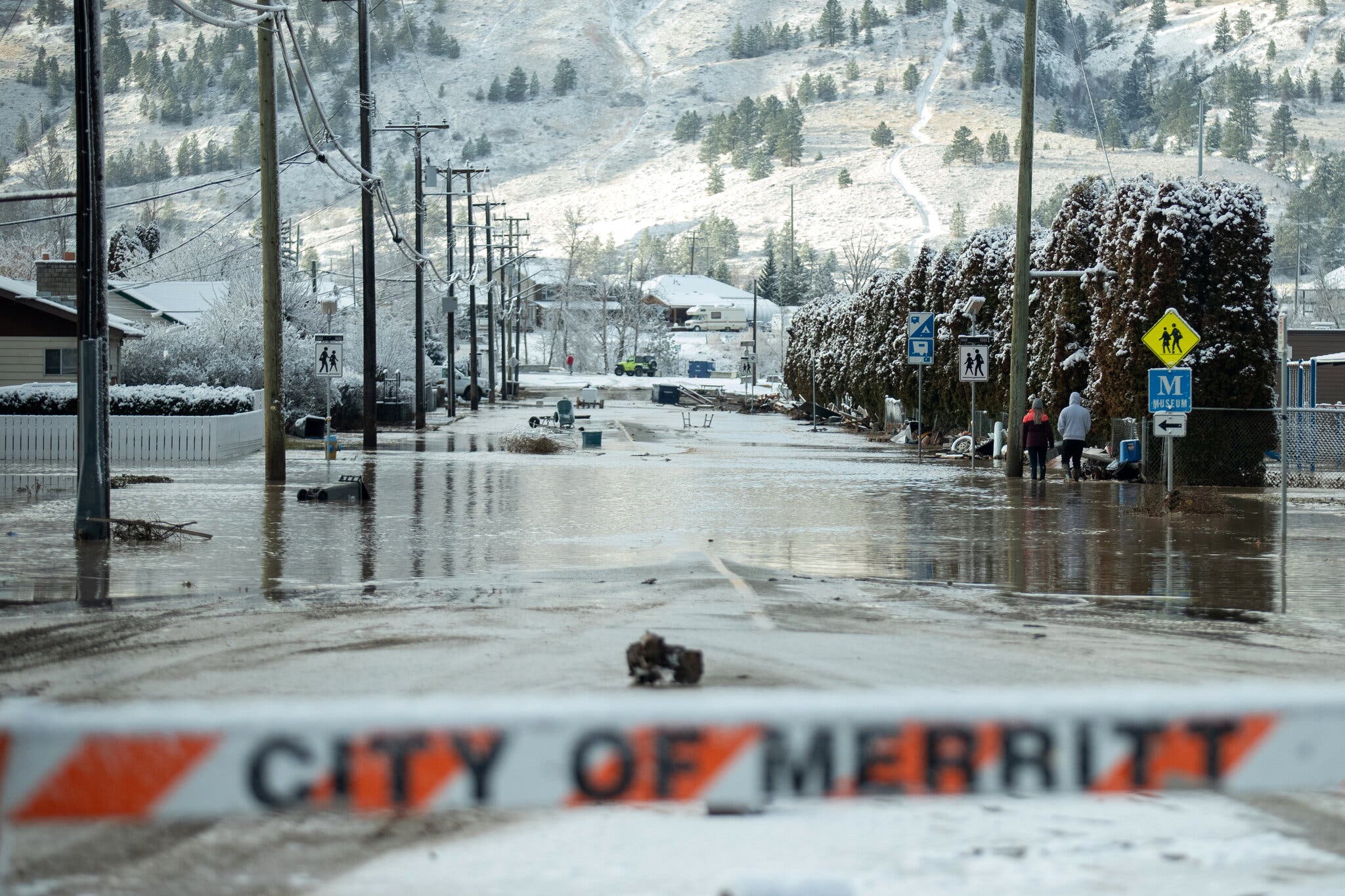 Human meddling with geography has also made things worse. Much of the fertile farmland near Abbotsford was created 100 years ago by draining the Sumas Lake, a process that forced Indigenous people onto other land. While pumps and levees held back some of the water, the storm last week allowed the lake to reassert itself after a century.

As the rain poured down and roads closed, panicked shoppers reprised the early days of the pandemic and cleared out several grocery stores, particularly in the Vancouver area.

Rebuilding lost bridges, roadways and railways could take months. But Greg Wilson, the director of government relations in British Columbia for the Retail Council of Canada, said that widespread shortages were not likely in the province. Fresh produce can still arrive on the highway from Seattle, the route much of it usually follows to supply Vancouver this time of year.

One highway out of Vancouver reopened to light cars and trucks over the weekend and another restored a single lane of traffic for essential travel. But trucks from elsewhere in Canada are mainly reaching Vancouver by detouring through the United States. And much of the interior of British Columbia, the hardest-hit area, is still open to the rest of Canada by train and truck.

“There’s no danger of the Vancouver area running out of food,” Mr. Wilson said. “There will be challenges, but there’s lots of supply.” 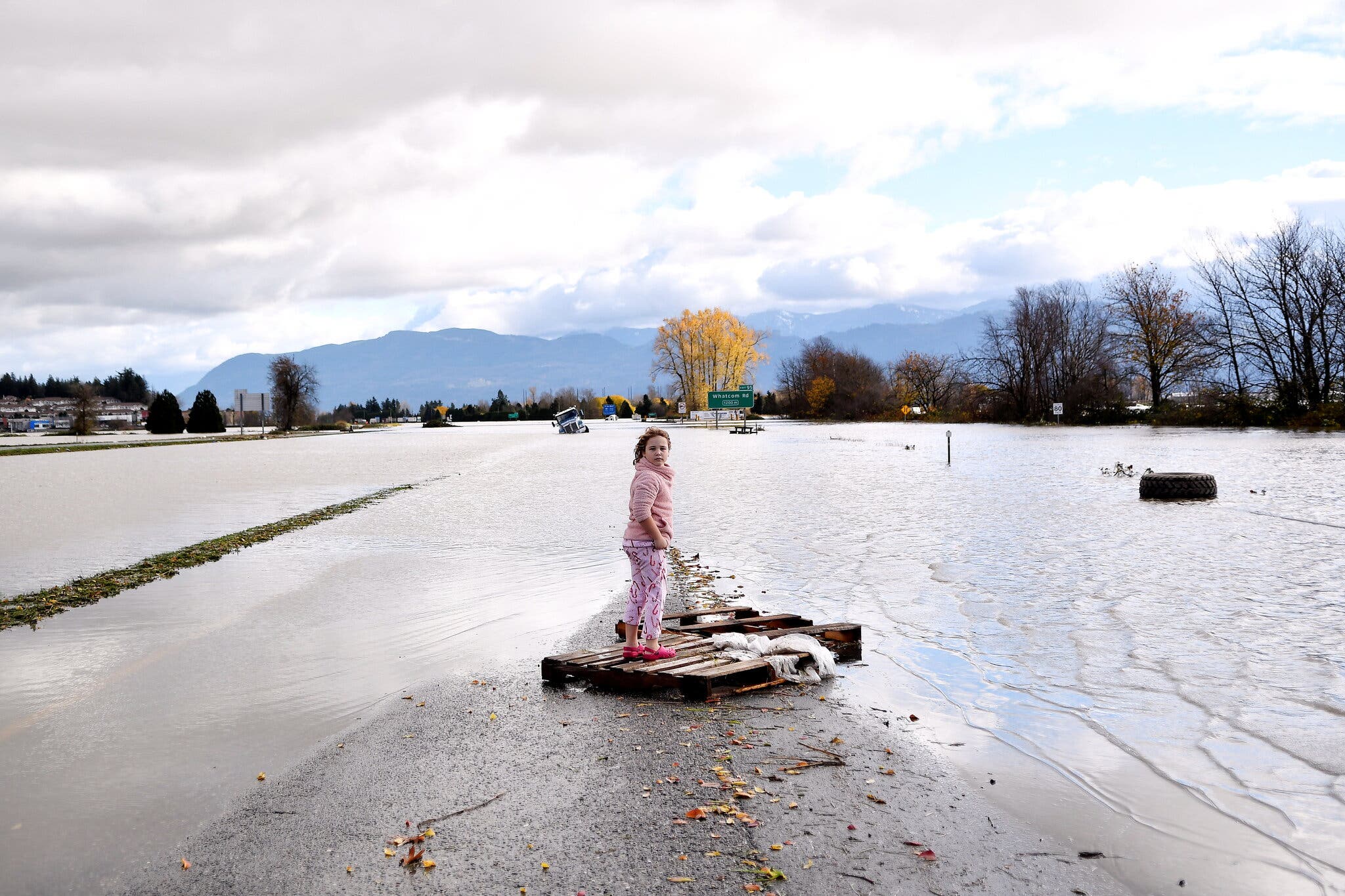 A flooded stretch of the Trans-Canada highway in Abbotsford.Credit...Jennifer Gauthier/Reuters 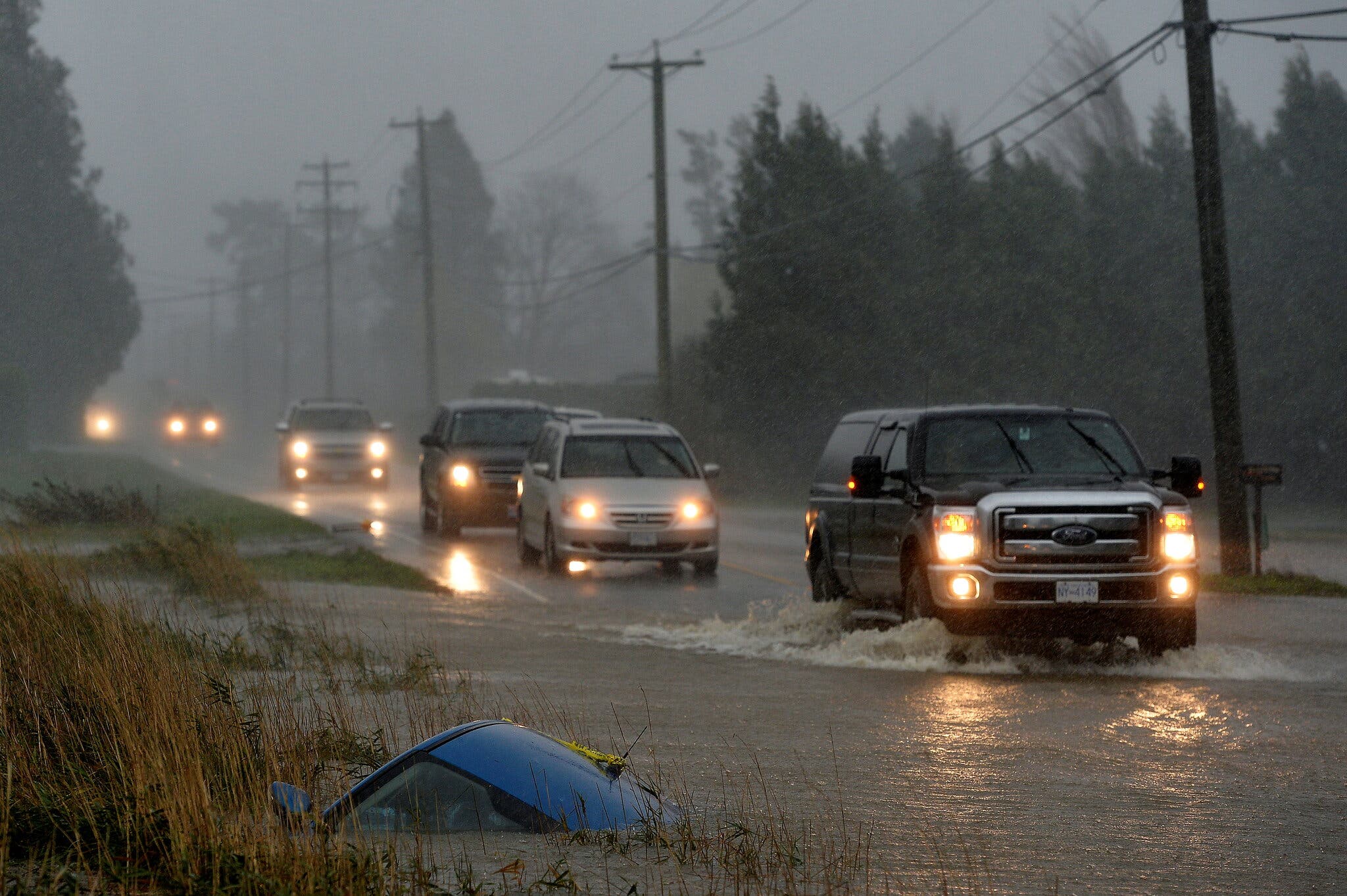 A car in a ditch on a flooded stretch of road in Chilliwack, British Columbia.Credit...Jennifer Gauthier/Reuters

British Columbia has been a leader in trying to mitigate the effects of climate change, said Barry Prentice, a professor at the University of Manitoba and the former director of its transport institute. In 2008, it introduced North America’s first carbon tax. It has also taken physical measures. The port in Vancouver, he said, has been lifted by about three feet to accommodate rising sea levels.

But province’s mountainous nature, he said, limits what is possible and will make rebuilding a difficult and prolonged process.

“To try and make everything resilient is very hard,” he said. “We don’t have many options for routes coming through the mountains.” 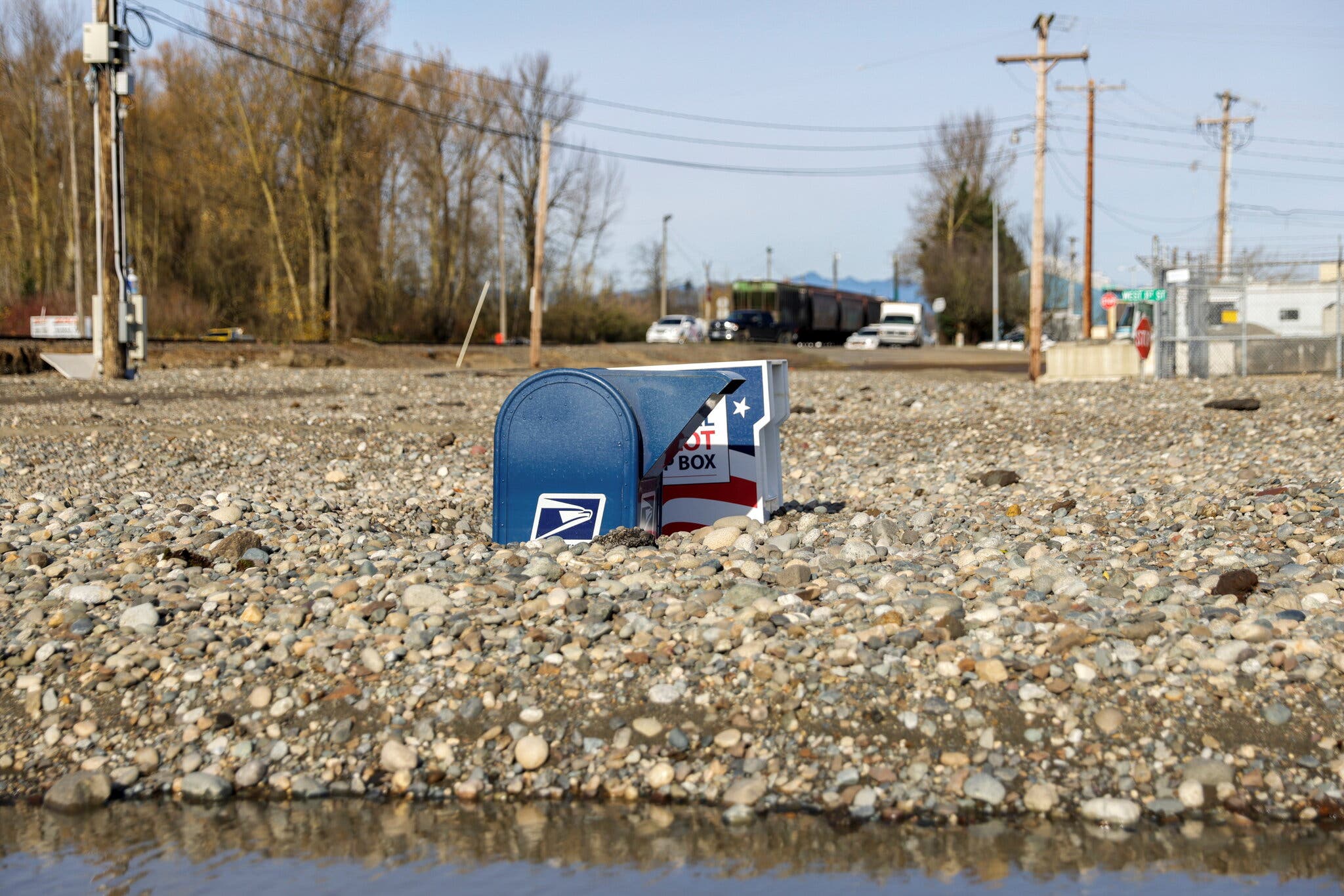 Across the border in Sumas, Washington, a mailbox was partly covered in sediment after rainstorms that hit British Columbia and Washington State.Credit...Jason Redmond/Reuters 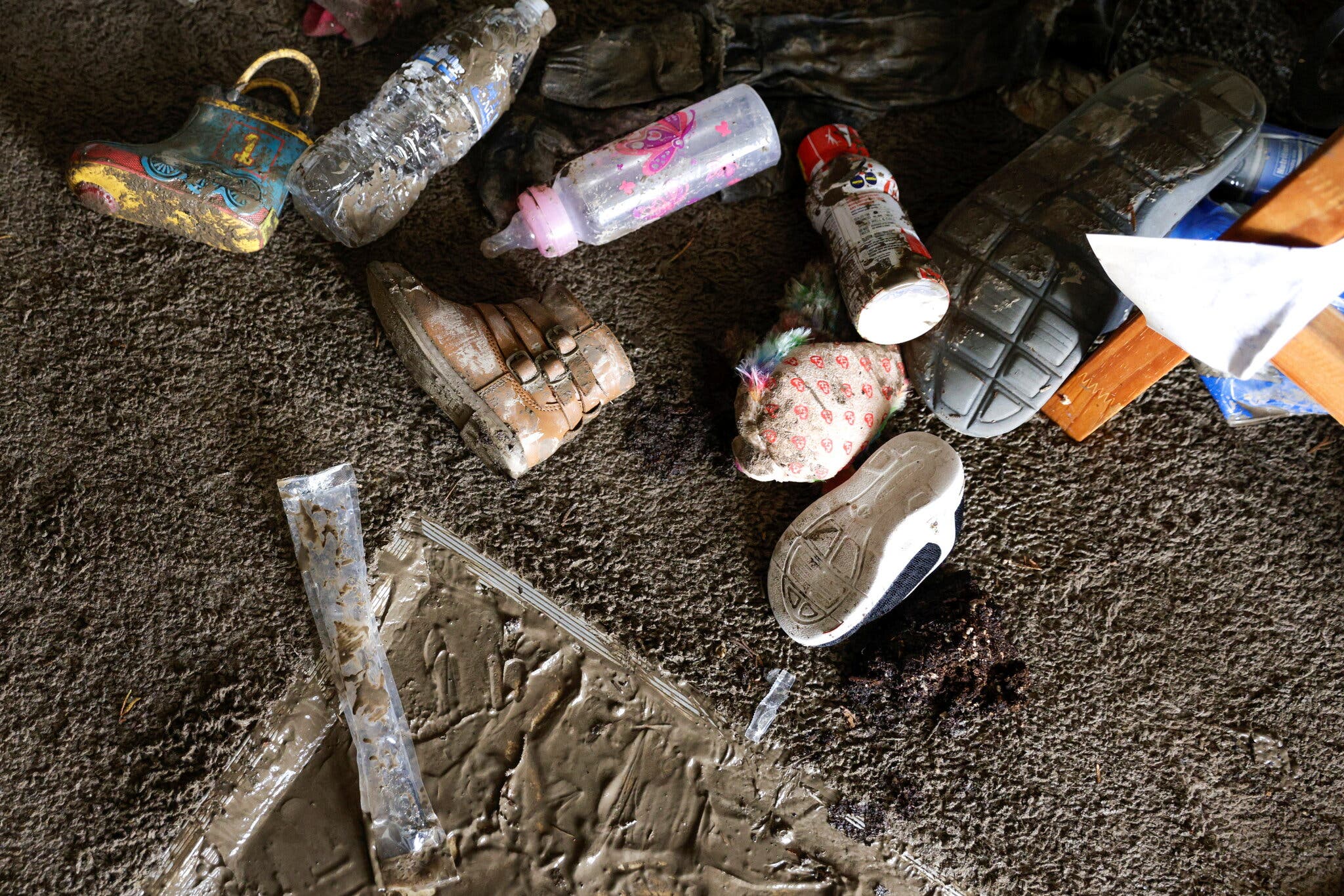 Children’s shoes in a mud-soaked home.  Gary Aardema Jr.  says he and his family were caught by surprise and narrowly escaped in Sumas.Credit...Jason Redmond/Reuters

The delays in reopenings will most likely significantly affect all of Canada since Vancouver’s port connects the country to Asia, both for imports of consumer goods and economically vital exports of resources like grains and potash for fertilizers. While a rail line to the port in Prince Rupert in northern British Columbia remains open to the east, Professor Prentice said that the port could not physically handle all of Vancouver’s traffic on top of its normal operations.

While it may be possible to beef up the transportation network during rebuilding, Professor Prentice said that the only long-term solution remained dealing effectively with climate change. 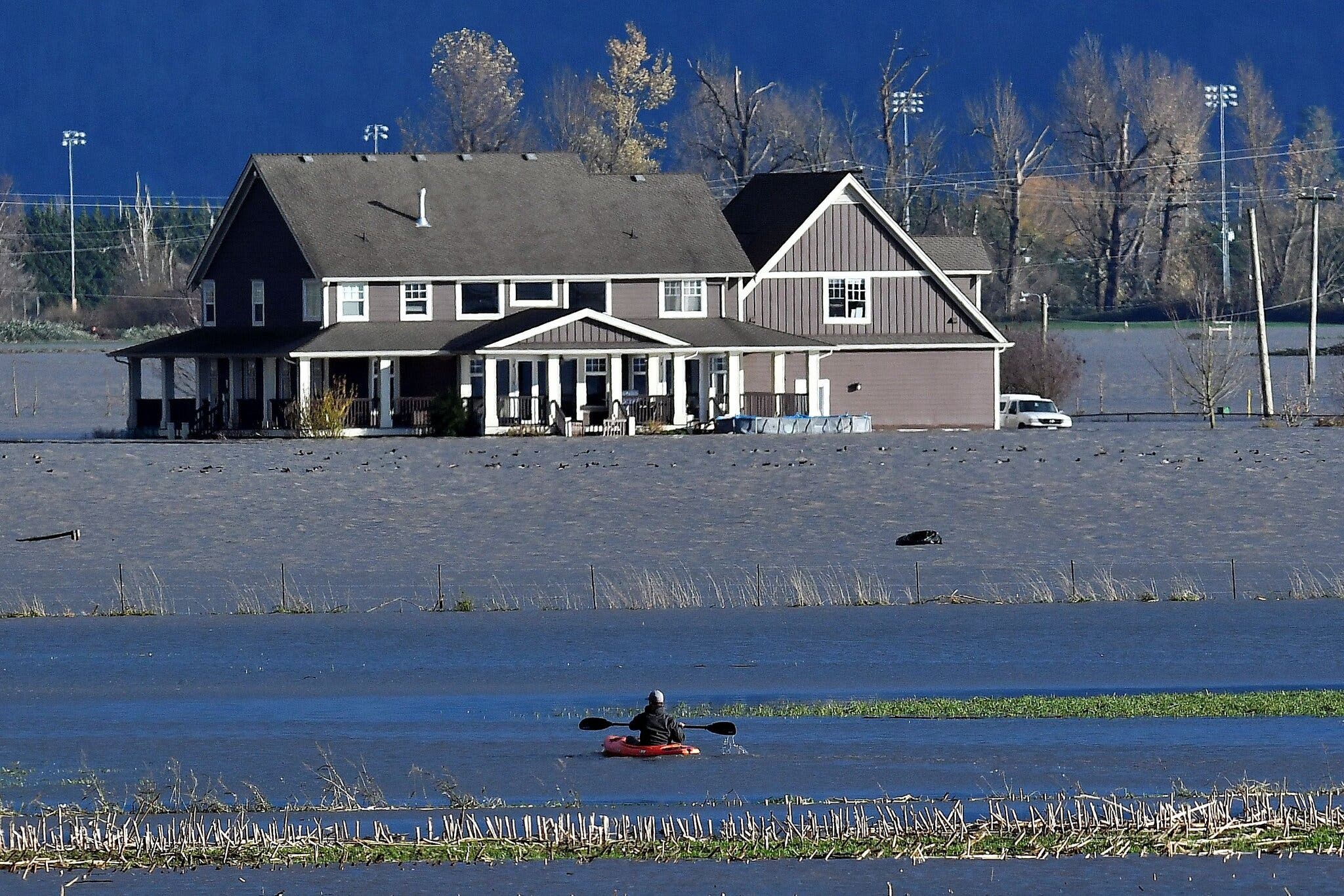 Kayaking on a flooded stretch of farmland in Abbotsford.Credit...Jennifer Gauthier/Reuters 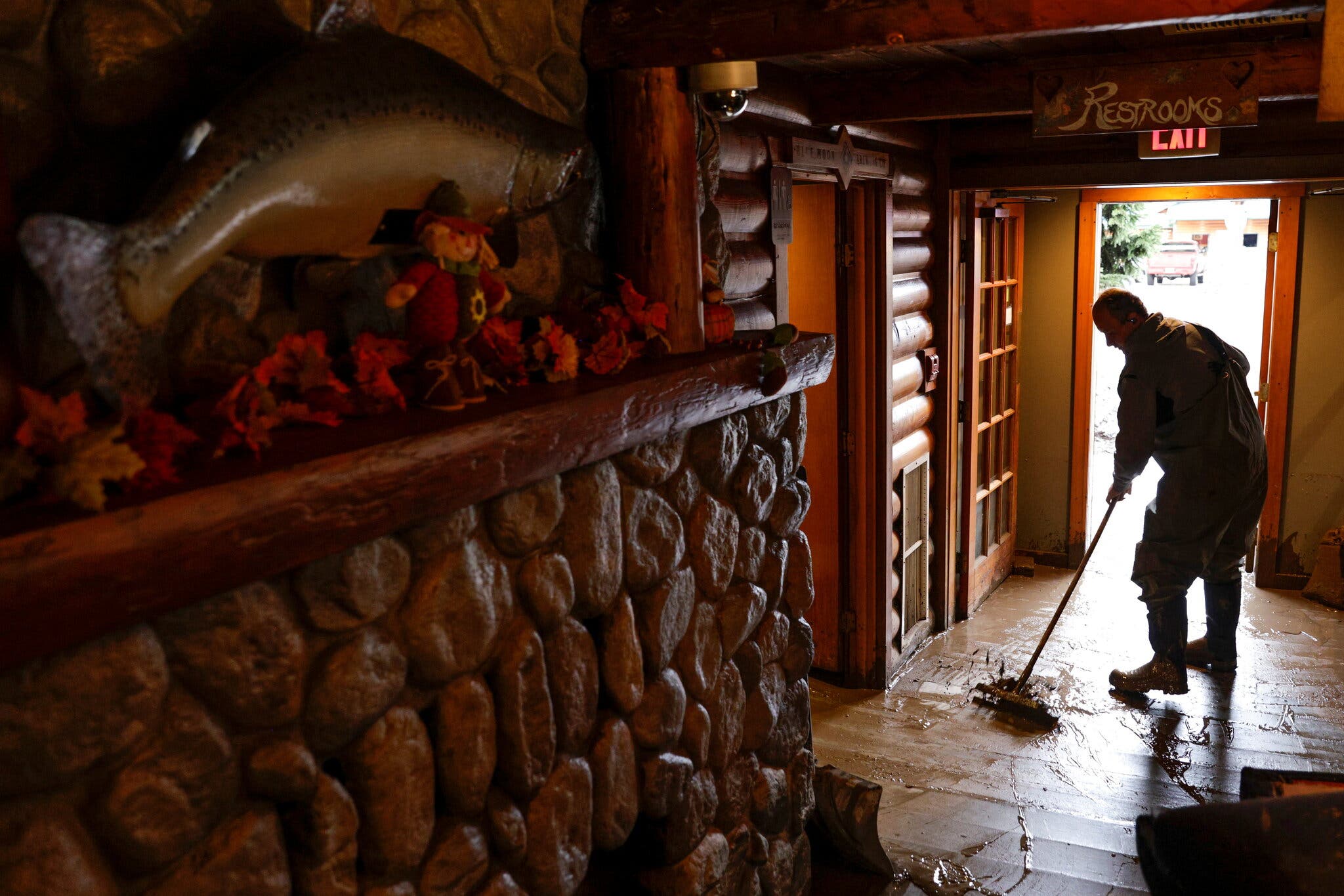 Cleaning up flood damage in Sumas, just south of the Canadian border.Credit...Jason Redmond/Reuters

Ms. Smith of Clean Energy Canada said that Prime Minister Justin Trudeau’s government had a credible and ambitious climate plan but that the country had yet to rein in its oil and gas industry, particularly oil sands operations based largely in neighboring Alberta.

“We need to reduce the emissions from the oil and gas sector; it is one of Canada’s biggest challenges,” she said. “All of these other good policies, we need to see them implemented without delays. There’s a lot of inaction that gets disguised as flexibility, and we’re past that time.”

While the water has started to recede in most flood zones, it is unclear when evacuees will return home or abandoned cars will be returned to their owners. And more danger may be ahead for British Columbia. Forecasts predict another batch of heavy rain this week. 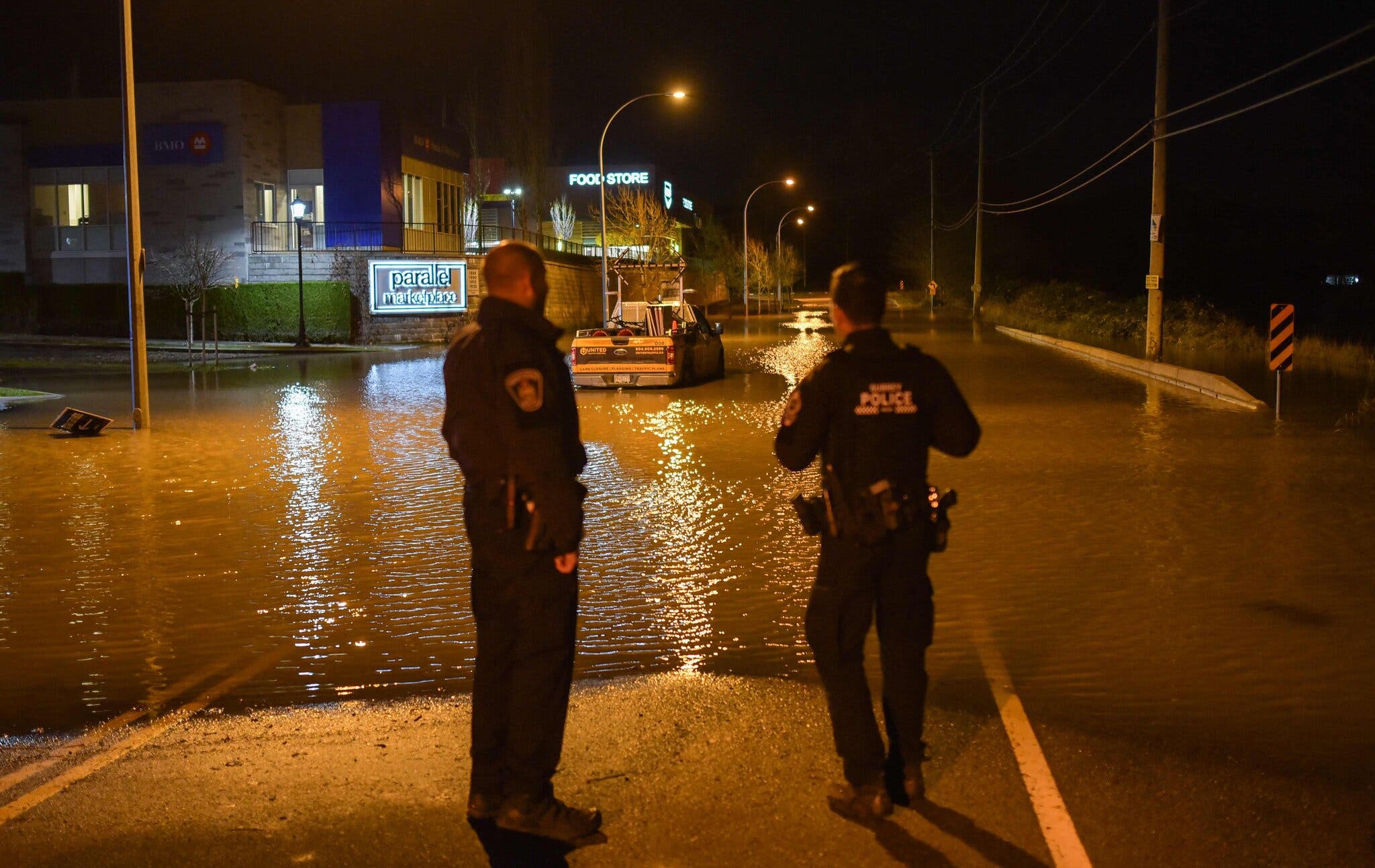 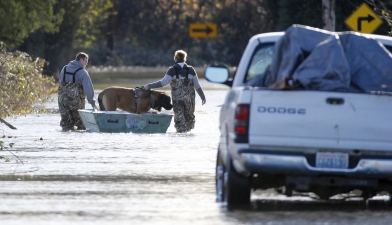 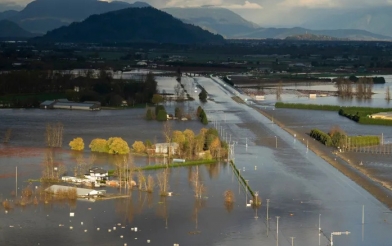 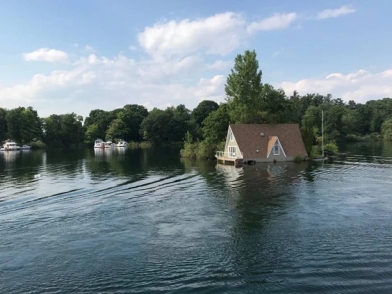 Up to 10% of Canadian homes are uninsurable for flooding: Here's what you need to know