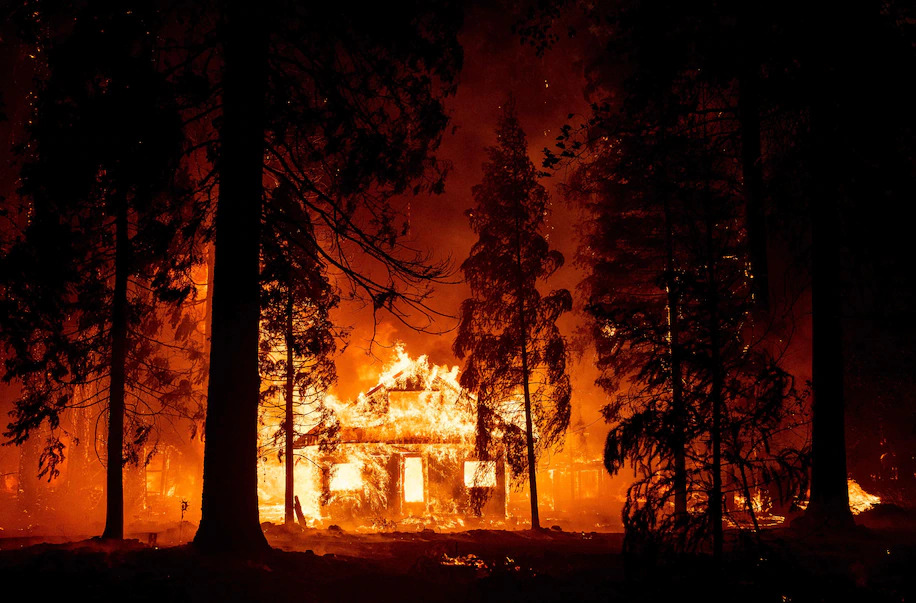 A home burns as flames from the Dixie fire tear through the Indian Falls neighborhood of unincorporated Plumas County, Calif., in July. The massive fire churned across nearly 1 million acres. (Josh Edelson/AFP/Getty Images)

Scores of studies presented this week at the world’s largest climate science conference offered an unequivocal and unsettling message: Climate change is fundamentally altering what kind of weather is possible, and its fingerprint can be found in the rising number of disasters that have claimed lives and upended livelihoods around the world.

Record-shattering heat waves, devastating floods, scorching wildfires and persistent droughts are among the litany of catastrophes scientists say they can definitively link to human activities — primarily the burning of fossil fuels.

The world must find a way to cope with this new era of climate disasters, researchers warn. Because without major changes, the forecast will grow only worse with time.

“The weather of the past will not be the weather of the future,” said Stephanie Herring, a climate scientist at the National Oceanic and Atmospheric Administration. “As long as we are emitting greenhouse gases at a historically unprecedented rate, we should expect this change to continue.”

Herring has closely tracked the link between extreme weather and climate change since 2012, when she edited the first “Explaining Extreme Events from a Climate Perspective” report for the Bulletin of the American Meteorological Society. The annual survey of what is known as “attribution science” draws on weather records and sophisticated climate models to determine how much inpidual events were influenced by human emissions.

It did not take long for the project to yield evidence of a transformed planet.

In 2016, the hottest year scientists had yet recorded, hundreds of people in India died amid unprecedented heat waves. A gigantic “blob” of warm water formed in the Pacific.Toxic algae bloomed off the coast of Alaska, poisoning shellfish and causing seabirds to starve.

The intensity of these events was beyond anything that existed in a preindustrial world.

The latest edition of the “Explaining Extremes” report shows that the period between December 2019 and February 2020 was the warmest and wettest period in recorded Russian history — a thaw so acute it could not have happened if not for climate change. Melting permafrost belched carbon and destabilized homes. Bears were jolted out of hibernation. Moscow officials had to supplement their New Year’s celebrations with artificial snow.

Just this summer, a dome of punishing heat descended on the Pacific Northwest, scorching crops, melting pavement and cooking a billion sea creatures inside their own shells. Hospitals saw 69 times the usual number of emergency room visits; one facility put patients in body bags filled with ice in a desperate effort bring their internal temperatures down. More than 1,000 people died. 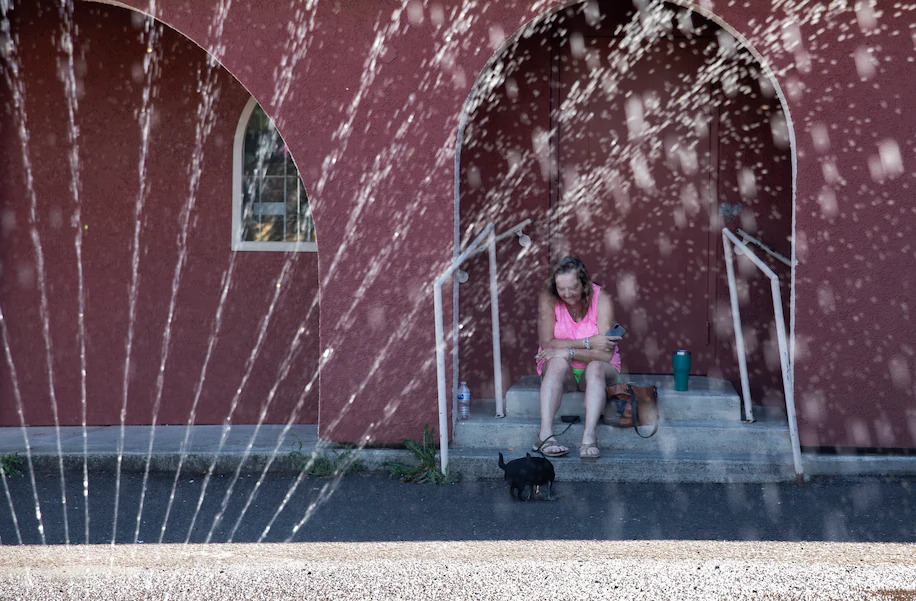 Pam Wilson, 62, sits outside with her dog Harley at the Sunrise Center cooling center in Portland, Ore., on June 27, 2021. (ALISHA JUCEVIC/For The Washington Post)

A rapid analysis conducted shortly after the event found that the heat wave would have been “virtually impossible” without human influence.

“People are suffering and dying unnecessarily,” said Kristie Ebi, director of the Center for Health and the Global Environment at the University of Washington in Seattle and a contributor to the heat wave study.

Speaking to reporters at the American Geophysical Union (AGU) meeting Thursday, Ebi pointed to research showing that more than a third of all heat wave deaths can now be linked to climate change. Children under 5 and adults over 65 — two of the groups most vulnerable to high temperatures — were collectively exposed to almost 4 billion more days of extreme heat in 2020 than the 1986-2005 average.

Cassandra Rogers, a climate scientist at Washington State University, showed that the number of days per year with multiple major heat waves has spiked from about 20 in the early 1980s to roughly 150 now.

“Almost every day from June through September has two or more heat waves happening around the world,” she said.

As the atmosphere traps more heat, the ocean soaks up that energy and transforms it into fuel for hurricanes. High temperatures cause water to evaporate from vegetation and soil, amplifying drought.

Warmer air can also hold more moisture, so that the rain that finally does fall comes in a deluge. Fires burn hotter in this world. Floods are faster, wetter, bigger.

“We’re putting enough energy in there that events we’ve always had are going to be even more powerful,” said oceanographer Susan Lozier, dean of the College of Sciences at the Georgia Institute of Technology and American Geophysical Union president.

Changing the amount of heat in the Earth system also changes how that heat gets distributed, Lozier added. Wind patterns and ocean currents are shifting. Monsoonal rains may come late, or not at all.

With global temperatures already more than 1.1 degrees Celsius (2 degrees Fahrenheit) higher than in the preindustrial era, the fingerprint of climate change has become easier and easier for scientists to see. In 2000, there were 14 studies containing the words “attribution” and “climate change” presented at the AGU fall meeting. In 2020, there were 213.

This year, the conference program is packed with sessions on climate and weather: “Effective communication of climate change risk”; “Implications of climate change, extreme events and adaptation potential for global agriculture”; “The past and future of fire.”

Every weather event is now indelibly marked by the fact that it’s happening in a warming world, Herring said. But that doesn’t mean the effect of climate change is always clear. 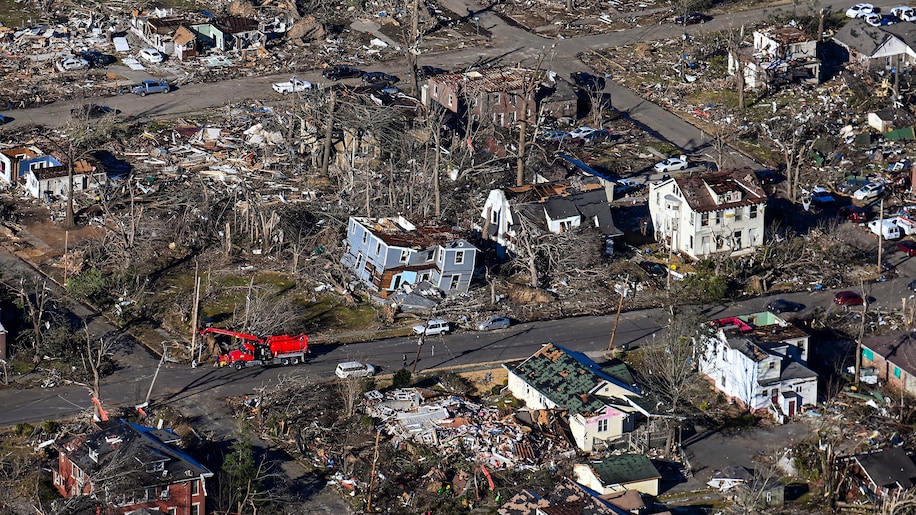 Homes destroyed by a tornado are seen from an aerial view on Dec. 12 in Mayfield, Ky. (Joshua Lott/The Washington Post)

Tornadoes like those that ripped through Kentucky last weekend are among the hardest events to attribute. Though higher temperatures may favor conditions that allow big thunderstorms to form, especially in winter months, the factors that turn a storm into a twister are so complex scientists cannot yet say with confidence whether warming plays a role.

But there is no doubt that the world is not done changing. The ongoing burning of fossil fuels is continuing to pump greenhouse gases into the atmosphere and further heat the planet.

“We still are emitting CO2, which means that conditions will keep worsening,” said Sonia Seneviratne, a Zurich-based climate analytics professor and an expert on extreme weather. “It’s not only a new normal. If anything, we have to get ready for summers that are much worse ahead.”

Seneviratne is among hundreds of authors of an exhaustive climate report published by the United Nations Intergovernmental Panel on Climate Change this August. It found that humans can unleash less than 500 additional gigatons of carbon dioxide — the equivalent of about 10 years of current global emissions — if we wish to meet the Paris agreement’s most ambitious goal of limiting warming to 1.5 degrees Celsius (2.7 degrees Fahrenheit).

Even at that level of warming, an event like Hurricane Maria — a “hundred year storm” in today’s world — would be expected to hit Puerto Rico roughly once every 75 years. At 2 degrees Celsius above preindustrial levels, more than 10 million additional people would be exposed to flooding from sea level rise. By 3 degrees, heat waves that once had a 2 percent chance of happening in a given year will become 27 times more likely.

That, Seneviratne said, is why it is imperative that humans find a way to cut emissions as quickly as possible.

“Even a tenth of a degree can make a difference,” she said.

But if recent catastrophes have not been enough to motivate action on the scale that is needed, Lozier wonders what will finally push people to transform the way they live, travel and grow food.

“How much worse does this have to get?” she said.

For Mayor Jan Polderman, as for many people in the British Columbia town of Lytton, the cost of climate change could not be more clear.

His scenic village near the confluence of the Fraser and Thompson rivers has endured one catastrophe after another. This summer, a day after it set Canada’s all-time heat record of 121 degrees, a fast-moving wildfire tore through the area, devouring scores of homes and displacing residents who had hastily fled the flames.

More recently, as many residents remain scattered and await the chance to rebuild, flooding and brought on by torrential rain last month washed out main roads to the north and south of Lytton, Polderman said.

“A lot of people are very fragile at the moment,” the 62-year-old mayor said. “It’s been a very tough year.”

Polderman spends a lot of time these days thinking about how the town can build back in a more resilient way, one that takes into account the prospect of hotter temperatures, longer droughts, more wildfires and heavier rain events.

“We need to plan for that, so we can live through it,” he said.

What he does not spend time on is wondering whether climate change is happening, and whether it will get worse. He has watched temperature records get obliterated in his town, wildfire consume the homes of friends and neighbors and biblical weather batter his province, all in the past year.

“I used to think that it was going to be the next generation that was going to have to deal with climate change. I think otherwise now,” Polderman said. “It’s something we better start dealing with sooner than later.”