Subscribe successfully!
The flooding in Pakistan is a climate catastrophe with political roots 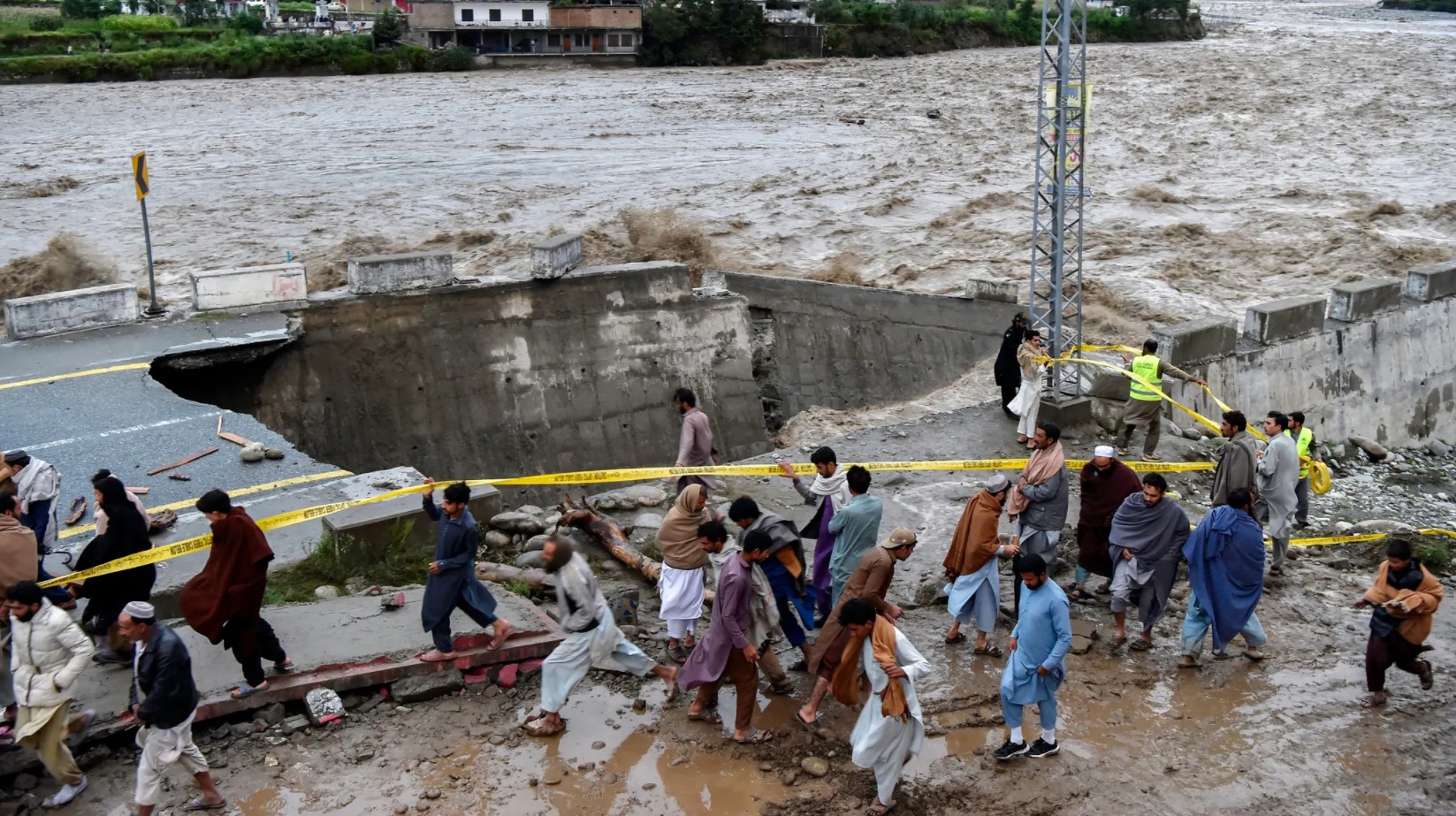 People move past a road washed out by floodwaters in Pakistan’s northern Swat Valley on August 27. Abdul Majeed/AFP via Getty Images

Flash floods over the weekend left one-third of Pakistan submerged from weeks of heavy rains, compounding an already difficult set of political and economic crises in the country.

The catastrophic flooding has affected 33 million people, about 15 percent of the population, according to Pakistan’s National Disaster Management Authority. More than 1,130 people have been killed since June’s monsoon season began, and at least 75 died in the past day. There has been $10 billion of damage and an estimated 1 million homes wrecked.

“There was a super flood in 2010, but this is the worst ever in the history of Pakistan,” Shabnam Baloch, the country director for Pakistan at the International Rescue Committee, told me. “The type of catastrophe we are seeing at the moment is just indescribable. I don’t even have the right words to put it in a way that people can visualize it.” 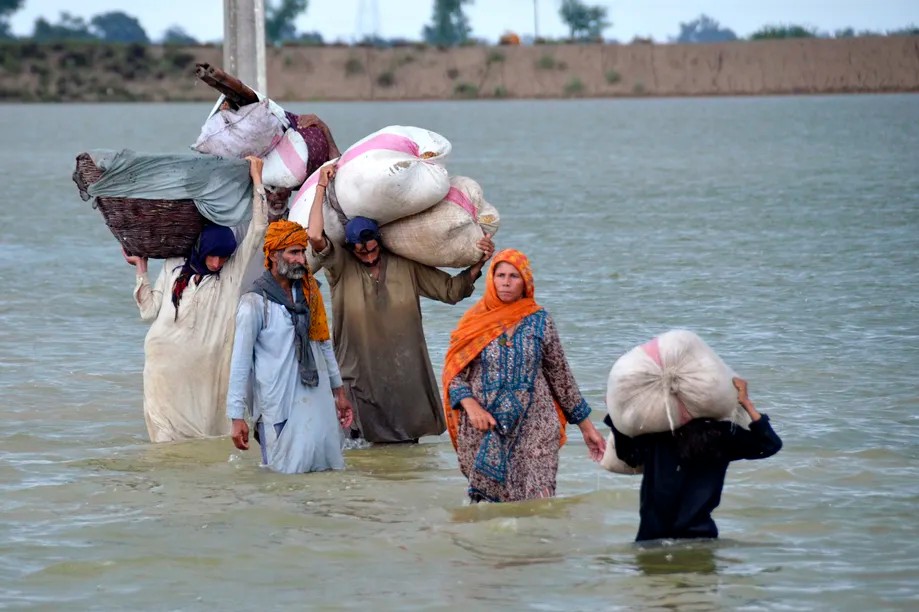 A displaced family wades with their belongings through a flooded area in the Jaffarabad district of Pakistan’s Balochistan province on August 24. |  Zahid Hussain/AP 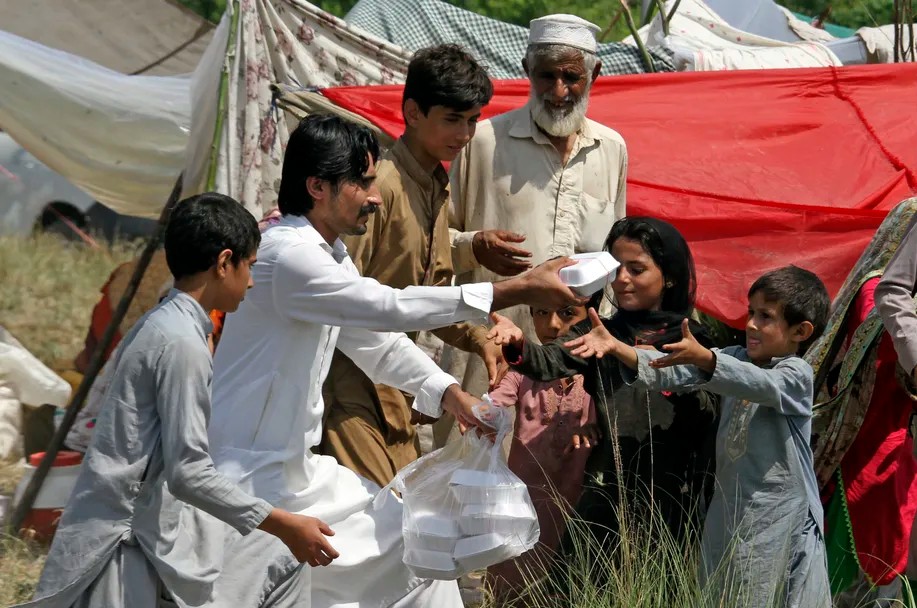 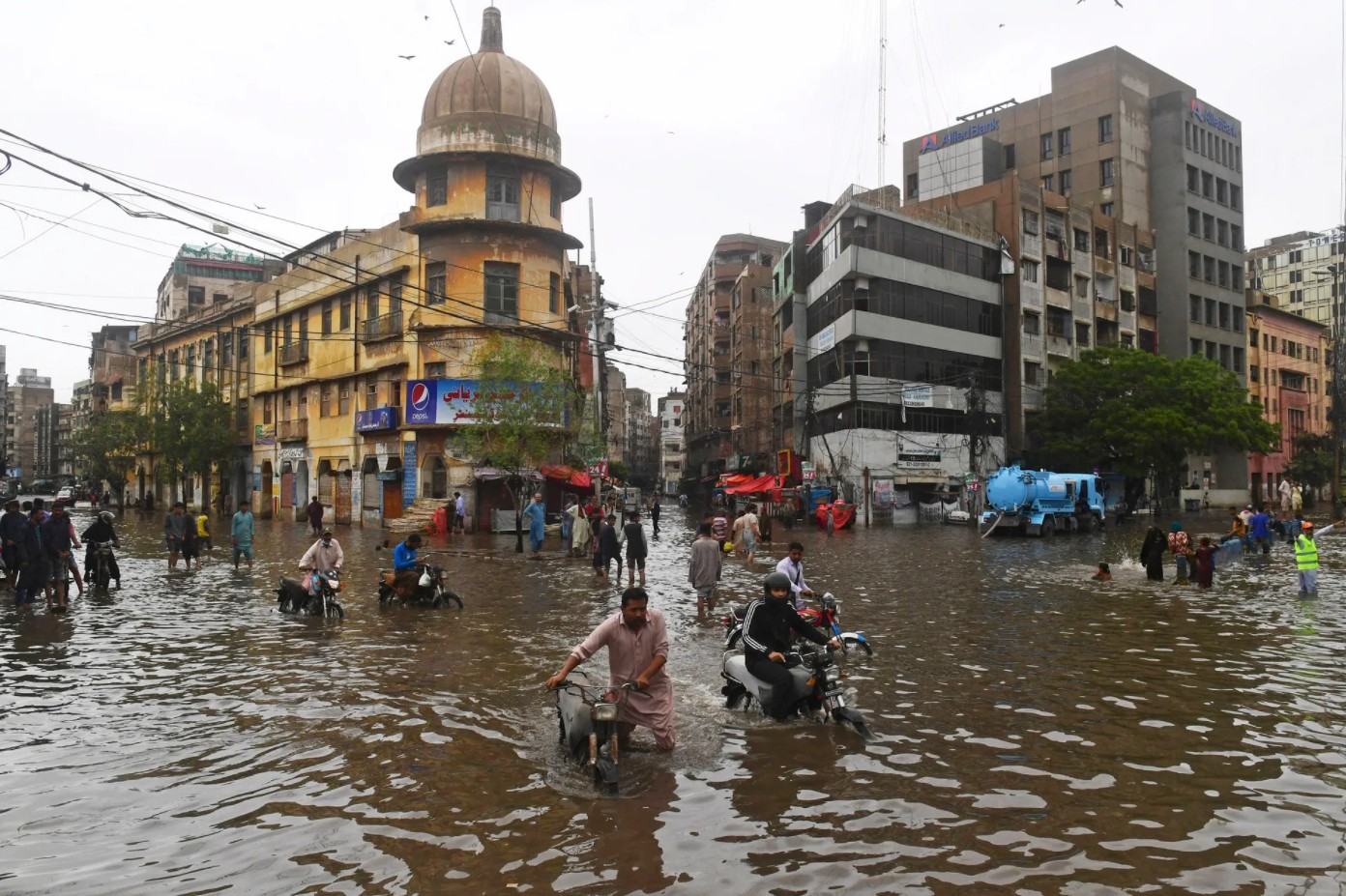 People make their way through flooded streets after heavy monsoon rainfall in Karachi, in Sindh province, on July 25.  | Asif Hassan/AFP via Getty Images

The country’s south has been most affected, notably the provinces of Sindh and Balochistan. Though some degree of flooding is common in Pakistan during monsoon season, the intensity of the rainfall this month was 780 percent above average, according to Climate Change Minister Sherry Rehman.

“More than 100 bridges and some 3,000 km of roads have been damaged or destroyed, nearly 800,000 farm animals have perished, and two million acres of crops and orchards have been hit,” the United Nations’ World Food Program noted. The scale of flooding has impeded access for emergency groups seeking to get aid to the neediest.

This calamity alone would have been disastrous. But Pakistan this year has also endured economic difficulties and a lethal heat wave that, as Vox’s Umair Irfan reported, strained public infrastructure and social services. All these crises have been exacerbated by the country’s political situation, with the government targeting the recent ousted prime minister, Imran Khan, and by the global economic plight.

“Pakistan has faced a series of crises this year: economic, political, now, a natural disaster,” Madiha Afzal, a foreign policy researcher at the Brookings Institution, told me. “Running underneath all of this has been the political crisis.”

Early this year, a political crisis rattled Pakistan. While the immediate crisis was resolved, the underlying tensions remain, and if anything, have become even more polarized — creating a political conflict that may affect the way the country addresses these floods.

In April, cricket-star-turned-pseudo-populist Prime Minister Imran Khan sparked a constitutional crisis when he tried to stave off a vote of no-confidence by dissolving the Pakistani parliament. Eventually, the country’s supreme court ruled that he had acted unconstitutionally, the uproarious no-confidence vote proceeded, and he lost the prime ministership. 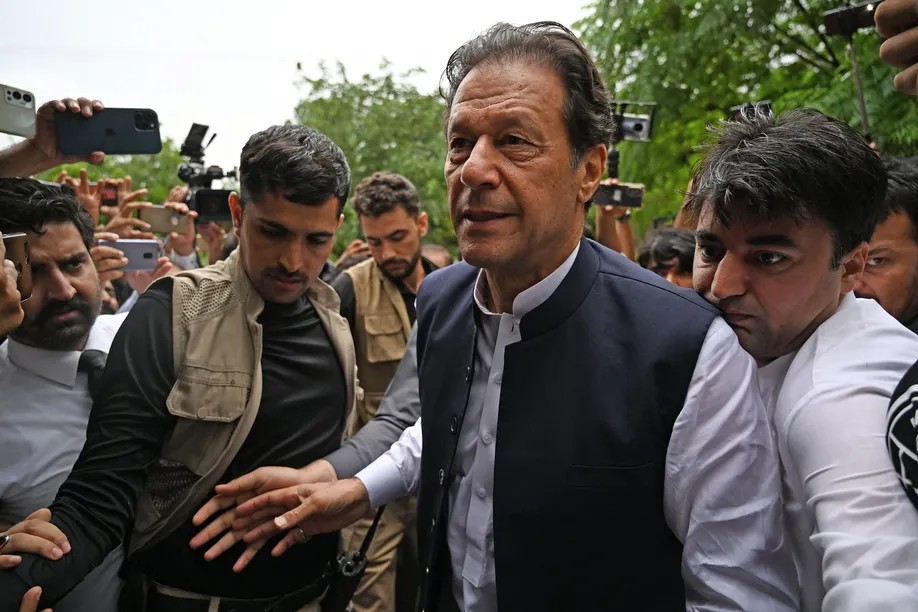 Since then, opposition leader Shehbaz Sharif became prime minister and has been presiding over a country hard hit by economic malaise — rising debt, a foreign currency shortage, and record inflation — deepened by the wide-ranging knock-on effects for energy and food insecurity presented by the Ukraine-Russia war.

All the while, the former prime minister has continued to hold political rallies that reinforce his street power. In turn, the government has launched a crackdown on Khan. Most recently, the police issued terrorism charges against him over a speech he delivered earlier this month. The next general election will be held in 2023, but Khan has been calling for early elections. Taken all together, it threatens to send Pakistan into an even more dangerous political phase.

It’s a serious situation, but also one that’s exacerbated and obscured the climate change-driven flood crisis.

Earlier this month, for example, Pakistan’s TV networks spent hours covering the story of an aide to Khan who had been detained on treason charges and alleged that he had been tortured in custody. “As Balochistan was being flooded — scenes and videos were rolling in from Balochistan — the government was basically concerned entirely with politics, and Khan was concerned entirely with politics,” Afzal told me. 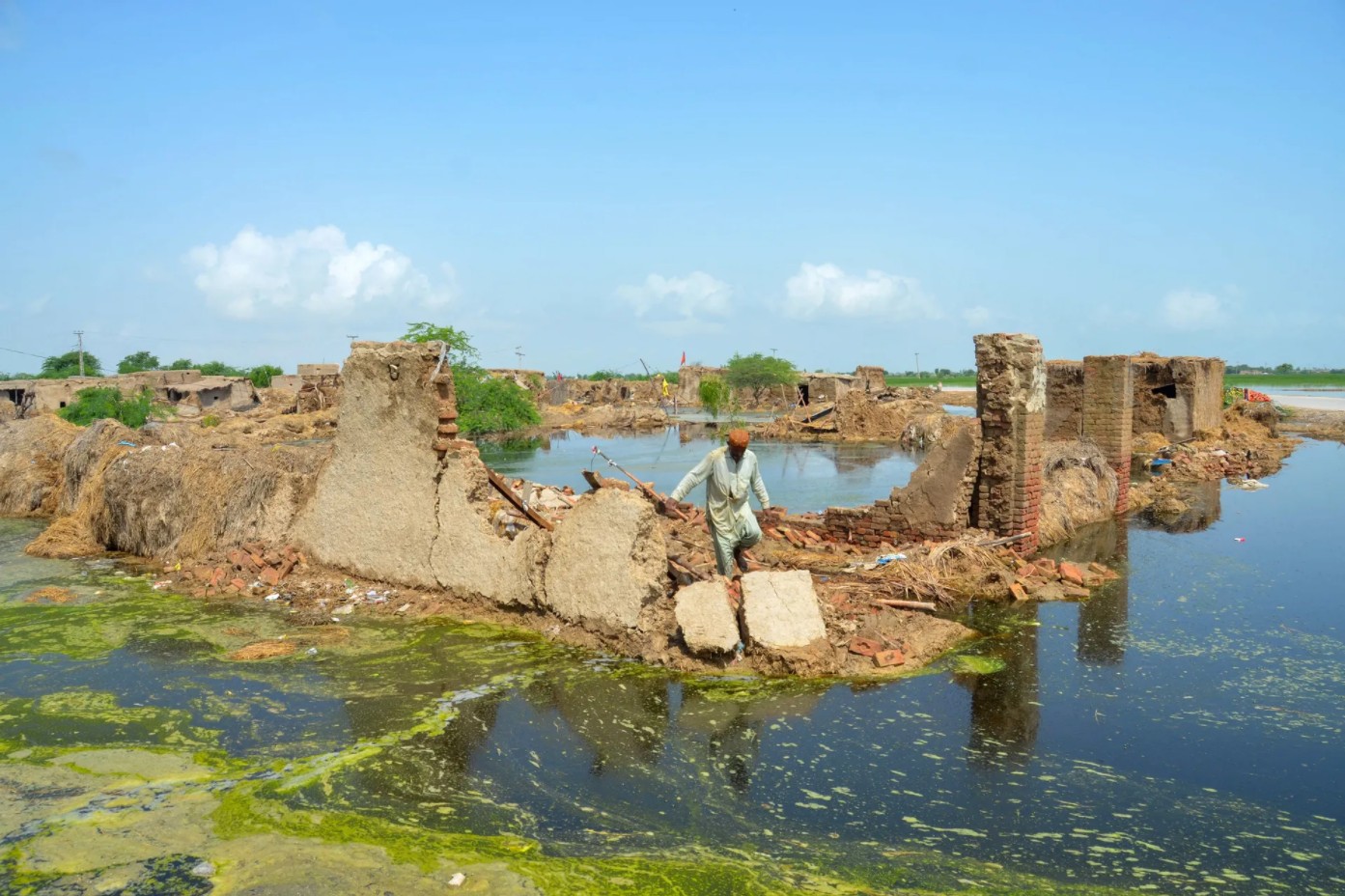 Sharif was caught up in politics, too. “The blame in many ways falls on the state for not taking charge of, for instance, its National Disaster Management Authority, not jumping into action right away,” Afzal told me. There have been no daily press briefings, she says, and very little awareness of the scale of the flooding — until last week.

Afzal worries political tensions between the federal government and the areas affected by flooding havehampered the government’s response. The northern province of Khyber Pakhtunkhwa, for instance, is run by Khan’s party, and Prime Minister Sharif only visited it on Monday.

For the Pakistani-British historian and activist Tariq Ali, the question is why the government has not done more to preempt the social crises that result from weather calamity. “Why has Pakistan, successive governments, military and civilian, not been able to construct a social infrastructure, a safety net for ordinary people?” he told Democracy Now. “It’s fine for the rich and the well-off. They can escape. They can leave the country. They can go to a hospital. They have enough food. But for the bulk of the country, this is not the case.”

Not just a natural disaster

She explained that structural inequalities, bad policy-making, and an emphasis on grand-scale infrastructure projects have made much of Pakistan woefully unprepared for the flooding. 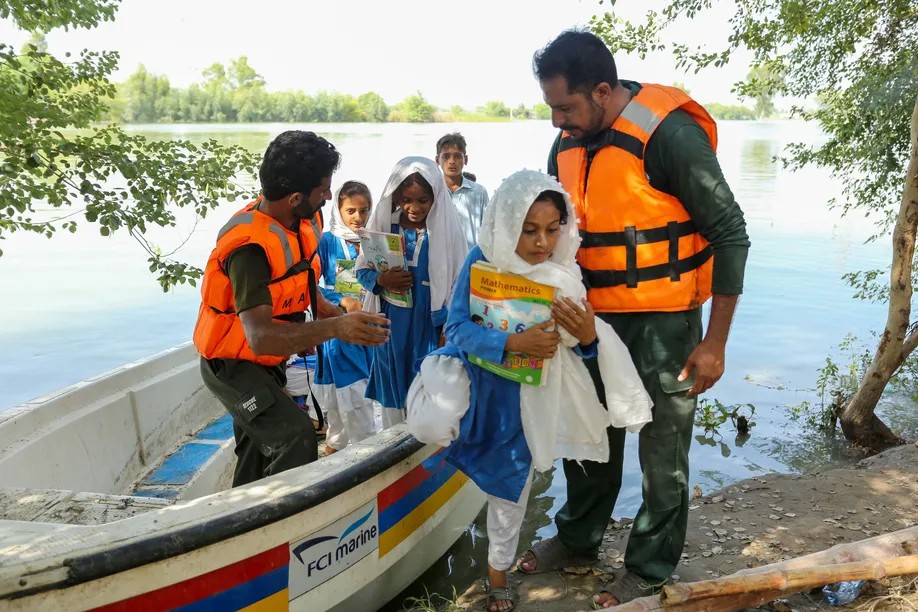 Children return home from school by boat in a flooded area of the Dera Ghazi Khan district of Pakistan’s Punjab province, on August 29.  | Shahid Saeed Mirza/AFP via Getty Images 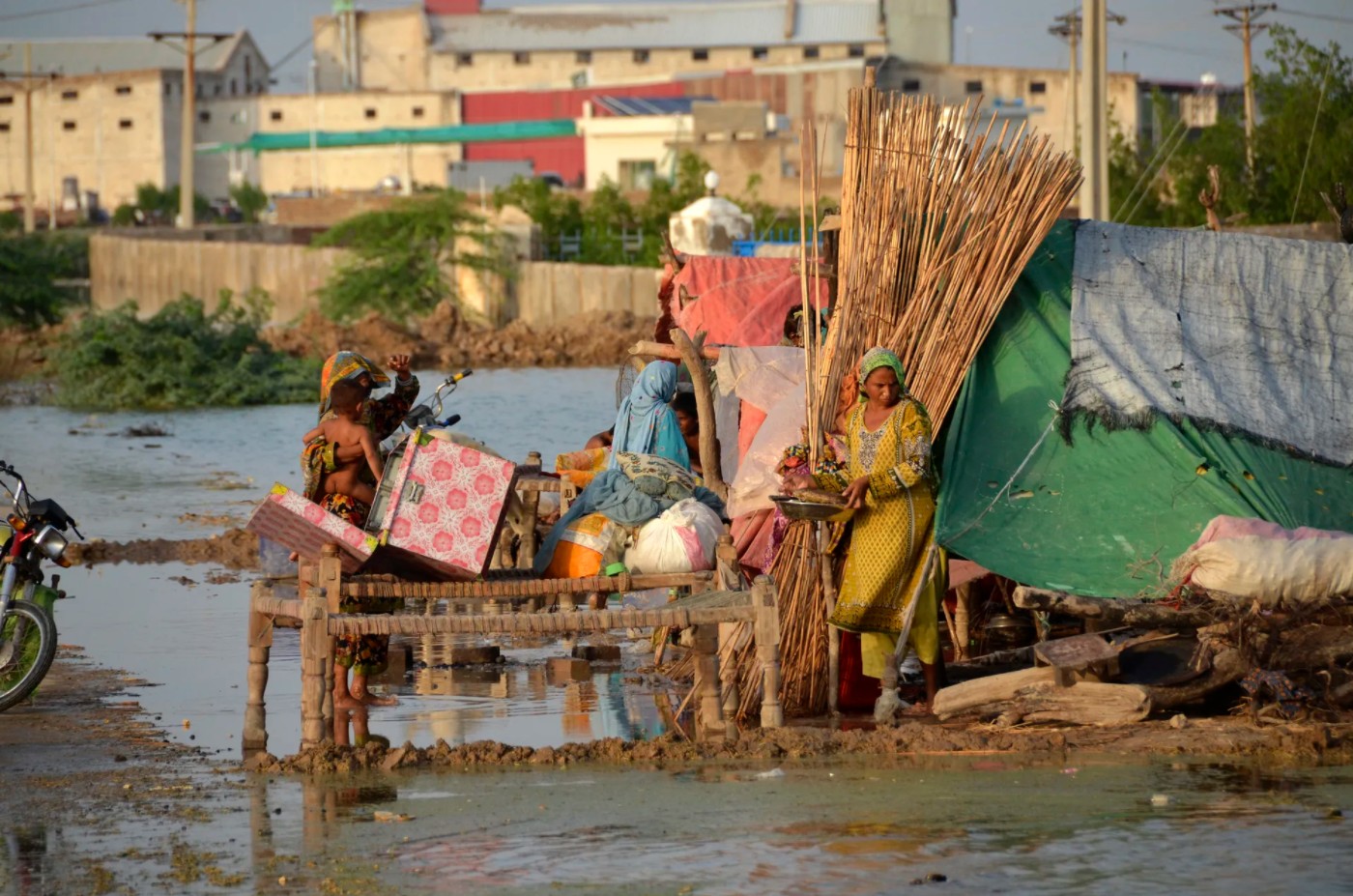 A family looks for items they can salvage from their flooded home, in Sohbat Pur, Balochistan province, on August 28.  | Zahid Hussain/AP

Pakistan “has kind of famously projected this idea of, ‘We need to build large dams, and we need to build large drainage projects, and we need to show our military might through these large projects to control water,’” Siddiqi told me. But whenever there’s extreme rainfall, the water has to flow somewhere. “So then there are these pockets of water that collect in these infrastructural reservoirs and dams, etc., that has to be released. And there’s a whole range of ecological issues that have arisen.”

Pakistan can learn from that history — and the last catastrophic floods it experienced a decade ago.

The main lesson the Pakistani government learned from the 2010 floods was how to get direct cash transfers to those affected. “People always want cash after a disaster — they much prefer cash, let’s say, compared to relief goods and things like that,” Siddiqi told me. “The state has learned how to go about reaching out to people, but what the state has been far less adept at managing is the longer-term issues of, how do we rehabilitate people in the next five years, 10 years, so that they are not this vulnerable again?” 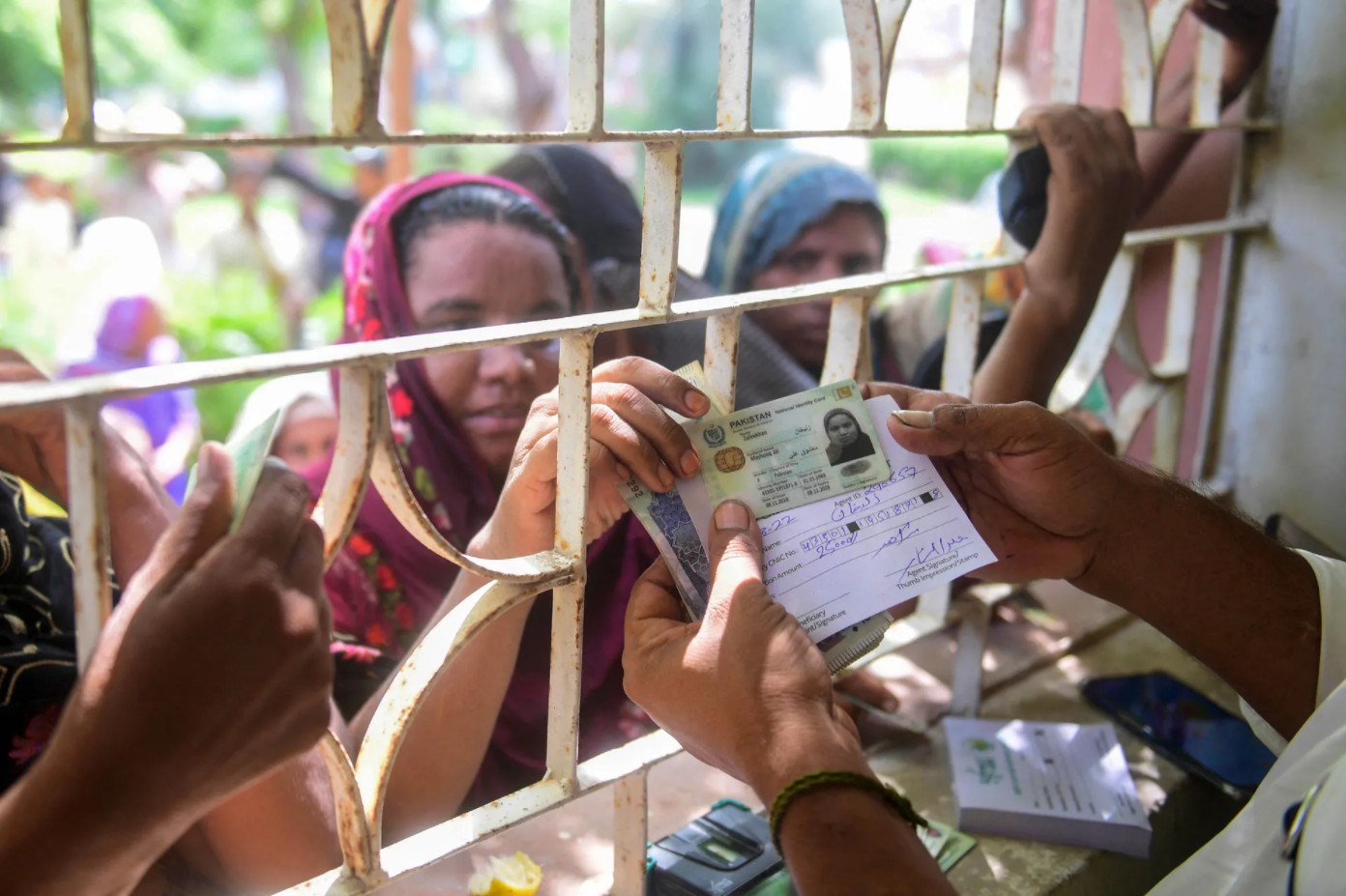 Women displaced from their homes by flooding show their national identity cards to receive 25,000 rupees in government cash aid in Sukkur, Pakistan, on August 29. Asif Hassan/AFP via Getty Images

For a country mired in political turmoil and economic setbacks, coordinating this response in the immediate and longer term will undoubtedly be a challenge.

Though international assistance will not in itself address these deeper inequalities in the country, aid groups are calling for a robust international response. “Pakistan contributes less than 1 percent of the world’s greenhouse gas emissions,” Farah Naureen, Mercy Corps’ country director for Pakistan, said in a statement. “This humanitarian catastrophe is yet another example of how countries that contribute the least to global warming are the ones that suffer the most.” 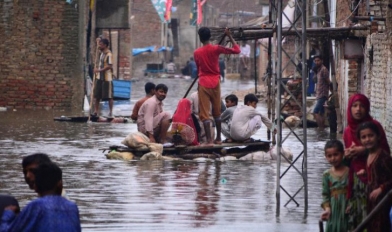 Over 900 killed by Pakistan monsoon rains and floods, including 326 children 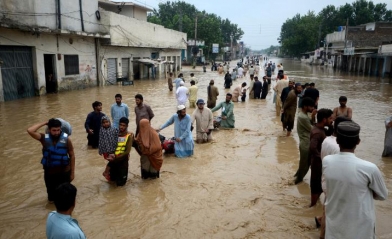 Hundreds of children among 1,000 people killed by Pakistan monsoon rains and floods 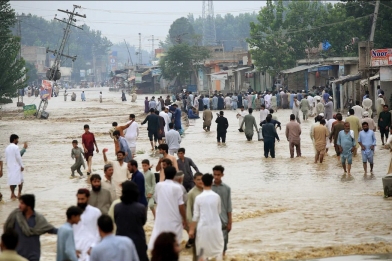