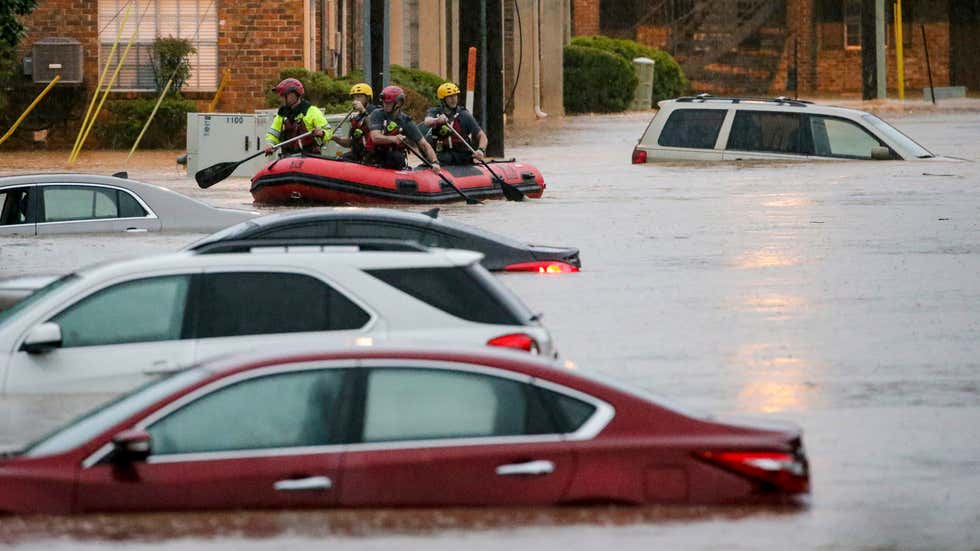 Residents of the Crescent at Lakeshore apartment complex are rescued by Homewood Fire and Rescue as severe weather produced torrential rainfall flooding several apartment buildings Tuesday, May 4, 2021 in Homewood, Ala. (AP Photo/Butch Dill)

Rescue teams in boats evacuated apartment residents near Birmingham, Alabama, on Tuesday after a rare flash flood emergency in portions of Jefferson and Shelby counties.

The alert came as powerful and deadly storms continued to cause damage across much of the South with more tornadoes, high winds and hail, in addition to the flooding.

At least three people have died in the severe weather – two in Georgia and one in Tennessee.

More than 200,000 homes and businesses from Texas across the Deep South and into Virginia were without electricity Wednesday morning, according to poweroutage.us. More than 138,000 of those were in Alabama and Mississippi.

Storms are expected to linger along the East Coast on Wednesday.

The National Weather Service office in Birmingham said radar estimates indicated 5 to 7 inches of rain fell across parts of Jefferson and Shelby counties on Tuesday.

Heavy rains pushed Shades Creek out of its banks Tuesday afternoon and into first-floor apartments at the Crescent at Lakeshore apartment complex in Homewood, about 5 miles south of Birmingham.

The Homewood Fire Department told WBMA-TV that 20 people were rescued from the complex.

Tuesday night, teams from the fire department and Homewood Police Department helped residents of the Rue Maison Apartments evacuate when that complex flooded.

James Coker, emergency management director for Jefferson County, told The Weather Channel that flooding was ongoing in several areas and there were numerous reports of swift-water rescues.

"Pick a direction, go in that direction, you’ll find flooding," Coker said. "We’ve had an incredible amount of rain across the county. There’s really no area of the county that has not experienced it. We’ve had several inches of rain and expect more rain before the event is over."

Water got into the first floor of Mountain Brook Junior High School on the southeast side of Birmingham, WBRC-TV reported.

Many streets in Birmingham were impassable because of high water.

In Mississippi, at least one tornado caused damage Tuesday near the capital city of Jackson.

Trees fell onto homes and into roads across Jackson. Power was knocked out for thousands of customers.

A home in the Laurelwood subdivision in neighboring Flowood took a direct hit from a tree in the front yard, WAPT-TV reported. No one was home when the tree fell.

The Hinds County Sheriff's Office said there were also reports of flooding in the Presidential Hills neighborhood in Jackson, according to WAPT.

In nearby Clinton, Public Information Officer Mark Jones told the Clarion-Ledger trees were blocking several roadways and the storm had damaged power lines and traffic lights in several areas.

Officials in Yazoo and Warren counties also reported downed trees, some of them on houses and others blocking roads, WAPT said.

Warren County emergency management agency officials said trees fell on at least seven homes in Vicksburg, according to the Clarion-Ledger.

At least 10 tornadoes were reported across 11 counties in Tennessee on Tuesday morning, according to Krissy Hurley, the warning coordinator for the NWS in Nashville.

"Most of the damage and/or pictures we have seen has been in the EF0 realm of things, but we’re still investigating," Hurley told WKRN-TV. "It will take us several days to develop survey details as well as specific maps since many of these tornadoes were embedded within straight-line wind damage as well."

A 49-year-old woman was killed when high winds blew a tree onto her mobile home in Dresden, Ray Wiggington, the director of Weakley County Emergency Management, said, according to WVLT-TV.

Officials in Hickman County declared a state of emergency because of extensive damage from a tornado that touched down in Clinton early Tuesday, KFVS-TV reported.

The NWS office in Paducah said an EF1 tornado struck at 3:39 a.m.

“A lot of power lines down, a lot of trees down,” Hickman County Emergency Management Director Justin Jackson told KFVS. “Then we started getting a lot of reports of different structures had been damaged.”

Jackson said in addition to homes, pole barns and farm equipment were damaged in the storm.

The NWS also confirmed tornadoes touched down in Fulton County and in Graves County.

The Graves County Sheriff’s Office said the worst of the storm damage was in an area of Lynville, south and across the Kentucky and Tennessee state line.

The NWS office in Wakefield, Virginia, confirmed on Tuesday that an EF2 tornado tracked across Northumberland County near Callao on Monday.

Neada Corbin's home was destroyed in the storm. About a dozen houses were damaged in the tornado.

“Henry called me and said, ‘Momma, where are you?’ He was all excited. ... He said, ‘A tornado came through here,'" Corbin told WWBT-TV.

On Tuesday, Corbin, 65, rummaged through the debris that had been her home for 40 years. She said she has lost everything that was inside the home.

“I cried on my way home from Tappahannock,” said Corbin, who was shopping there when the storm hit. “I got myself together and it’s OK. I got all my friends here and you know, God has a plan and it’s OK.” 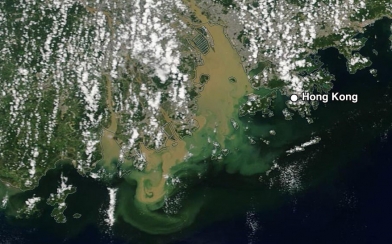 Torrential rains in China cause $2.9 billion in damage, leave 63 dead or missing 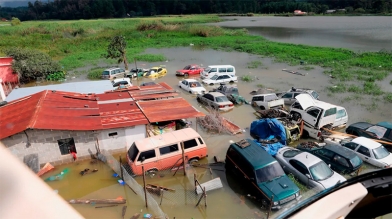