Subscribe successfully!
2021: a year when floods and fires made climate change a burning issue for the world 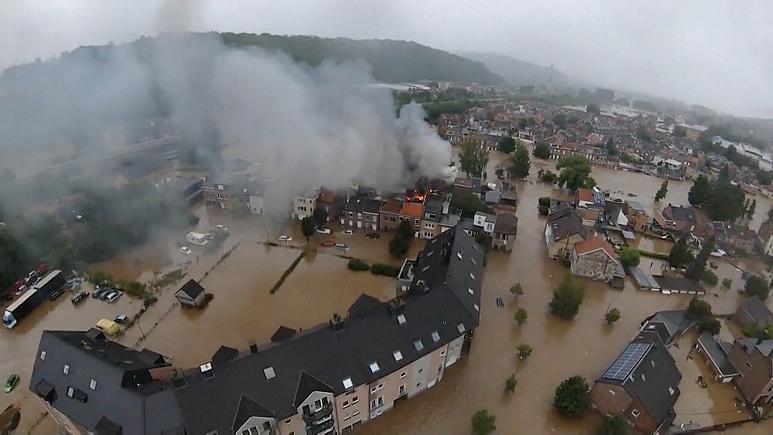 In 2021 it was impossible not to see or hear the slogans of activists and politicians as the devastating effects of climate change became real across the world including Europe.

Between flooding in several nations and massive wildfires in Greece, Turkey and parts of the US, it all started to look apocalyptic. The alarm bells were sounding loud and clear.

"It is very clear now that we're already experiencing the effects of climate change in Europe and around the world, especially in how our extreme weather is changing," warned Ed Hawkins, Professor of Climate Science at the University of Reading in the UK.

Floods and fire strike across Europe

A few weeks after deadly floods in Belgium and Germany, the IPCC panel of climate scientists published a report confirming that extreme weather events are becoming more frequent and more intense in many regions as a result of climate change.

In October, Euronews returned to one of the flooded German villages to witness the devastation.

The mayor of Altenahr told us how the population had been overwhelmed by the exceptionally high floodwaters.

"People had prepared for the flood of the century," said Cornelia Weigand, but that amount of water - 10 metres - that hasn't happened here before. It was much higher than in 1910 or 1804, and it was simply not conceivable."

Further south in Europe the problem wasn't water, it was fire.

Greece in particular witnessed the destruction of the island of Evia.

Of course, wildfires have always been with us and are part of life in warmer climates, but experts say climate change elevates such naturally occurring events to dramatic levels.

The summer of 2021 saw record-breaking heatwaves.

Syracuse in Sicily hit what may be confirmed as a new European record high of 48.8 degrees centigrade, a life-threatening temperature.

"Even those most at risk, like the elderly, people with chronic disease, often they don't consider it as a serious problem compared to other things," said Francesca De'Donato, an epidemiologist at Lazio regional health service in Italy. "And then that's why we get such high numbers or increases in mortality during heatwave events."

Amidst this real and present threat to life, world leaders gathered in Glasgow for the COP26 conference on climate change, billed as the last chance saloon to save the planet.

The aim was to limit greenhouse gas emissions enough to keep global warming to 1.5 degrees above the pre-industrial age average.

However, many outside the summit blasted it as a hotbed of compromise, the ambition doused by the fossil fuel lobby, and smouldering rows over climate justice.

COP26 ended with warm words, yet global warming remains the burning issue of our time.